"To Strive, to Seek, to Find, and Not to Yield"(?) and Cruel Ulysses 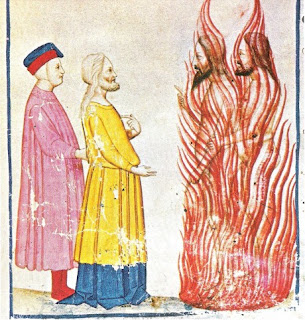 I break my pattern of not posting often again to highlight a passage from Dante's Inferno, Canto XXVI (26)--I'm attending a class at the Spiritual Life Center here in Wichita every Thursday night during Lent: we are finishing up the first book of the Divine Comedy tomorrow night and moving on to Purgatory, which we hope to finish before Holy Week.

BTW: we're going to have some festive treats for the Solemnity of St. Joseph tomorrow night too!

You might remember that all of Dante the Pilgrim's tour of Hell, Purgatory, and Heaven occurs during the Holy Triduum (Holy/Maundy Thursday, Good Friday, and Holy Saturday), Easter Sunday and the first three days of the Octave (ending on Wednesday). Our class will meet last on the Thursday before Holy Week, so it will be up to each of us attending the class to read Paradise during the Easter Season.

But last week, we ended the presentation with the great speech of Ulysses and the hint that Dante's Ulysses (who was not inspired by his appearance in either of Homer's epics, unavailable in Europe at that time) had inspired Lord Tennyson's poem Ulysses.

Virgil, the pilgrim Dante's guide, asks Ulysses to speak to Dante and tell his story: Virgil was no fan of the wily adventurer, who designed the Trojan Horse that led to the fall of Troy, but did lead to the founding of Rome by the Aeneas, Virgil's hero (Oh, Happy Deception?). When Virgil mentions Ulysses in The Aeneid, he is always "Cruel Ulysses", the deceiver and conniver. The Greek hero probably wouldn't speak to the medieval Italian poet, but will respond to the ancient Roman poet, and describes his last journey after his return to Ithaca (from the 1819 translation by The Rev. Henry Francis Cary):

Of the old flame forthwith the greater hornBegan to roll, murmuring, as a fireThat labours with the wind, then to and froWagging the top, as a tongue uttering sounds,Threw out its voice, and spake: "When I escap'dFrom Circe, who beyond a circling yearHad held me near Caieta by her charms,Ere thus Æneas yet had nam'd the shore;Nor fondness for my son*, nor reverenceOf my old father, nor return of love,That should have crown'd Penelope with joy,Could overcome in me the zeal I hadTo' explore the world, and search the ways of life,Man's evil and his virtue. Forth I sail'dInto the deep illimitable main,With but one bark, and the small faithful bandThat yet cleav'd to me. As Iberia far,Far as Marocco either shore I saw,And the Sardinian and each isle besideWhich round that ocean bathes. Tardy with ageWere I and my companions, when we cameTo the strait pass*, where Hercules ordain'dThe bound'ries not to be o'erstepp'ed by man.The walls of Seville to my right I left,On the' other hand already Ceuta past.
'O brothers!' I began, 'woe to the west'Through perils without number now have we reach'd;'To this the short remaining watch, that yet'Our senses have to wake, refuse not proof'Of the unpeopled world, following the track'Of Phoebus. Call to mind from whence ye sprang:'Ye were not form'd to live the life of brutes,'But virtue to pursue and knowledge high.'With these few words I sharpen'd for the voyageThe mind of my associates, that I thenCould scarcely have withheld them. To the dawnOur poop we turn'd, and for the witless flightMade our oars wings*, still gaining on the left.Each star of the' other pole night now beheld*,And ours so low, that from the ocean-floorIt rose not. Five times re-illum'd, as oftVanish'd the light from underneath the moon,Since the deep way we enter'd, when from farAppear'd a mountain dim*, loftiest methoughtOf all I e'er beheld. Joy seiz'd us straight,But soon to mourning chang'd. From the new landA whirlwind spring, and at her foremost sideDid strike the vessel. Thrice* it whirl'd her roundWith all the waves, the fourth time lifted upThe poop, and sank the prow: so fate decreed:And over us the booming billow clos'd*." Ulysses is, with Diomedes, his companion in deception, in Hell because of his misuse of human reason: he is in lower circles of Hell because of sins greater than murder or violence, because he corrupted his humanity, even with his men on this last voyage, as he leads them on into the West just for the sake of his desire for adventure.

Like Ulysses and his men, Dante the Pilgrim is about to see that lofty mountain--Mount Purgatory--although Dante can climb the mountain, and Virgil can too, for a time.

Tennyson takes on that spirit of adventure and constant daring in his poem:

It little profits that an idle king,
By this still hearth, among these barren crags,
Match'd with an aged wife, I mete and dole
Unequal laws unto a savage race,
That hoard, and sleep, and feed, and know not me.
I cannot rest from travel: I will drink
Life to the lees: All times I have enjoy'd
Greatly, have suffer'd greatly, both with those
That loved me, and alone, on shore, and when
Thro' scudding drifts the rainy Hyades
Vext the dim sea: I am become a name;
For always roaming with a hungry heart
Much have I seen and known; cities of men
And manners, climates, councils, governments,
Myself not least, but honour'd of them all;
And drunk delight of battle with my peers,
Far on the ringing plains of windy Troy.
I am a part of all that I have met;
Yet all experience is an arch wherethro'
Gleams that untravell'd world whose margin fades
For ever and forever when I move.
How dull it is to pause, to make an end,
To rust unburnish'd, not to shine in use!
As tho' to breathe were life! Life piled on life
Were all too little, and of one to me
Little remains: but every hour is saved
From that eternal silence, something more,
A bringer of new things; and vile it were
For some three suns to store and hoard myself,
And this gray spirit yearning in desire
To follow knowledge like a sinking star,
Beyond the utmost bound of human thought. . . .

He wants to set sail again like Dante's Ulysses until he dies, calling to his men "To Strive, to Seek, to Find, and Not to Yield."

We often think that is exactly what we ought to do too. What if that's not what God wills?

On a less grand scale, that may be how some of us are feeling during this Covid-19 pandemic: we're restrained by warnings not to be in large gatherings, not to shake hands, not to be out in public much at all, especially if we are of a certain age or have chronic health issues. Catholic dioceses around the country and the world have issued various decisions about schools and churches, activities and Masses--we grow restless because we are used to going, going where and when we want, and now we can't or shouldn't. Dante's Ulysses could not restrain himself and left home and those he loved--and who loved him--even after he had undergone so much to be reunited with his wife and son and homeland. He did not think of them; he really wasn't thinking that much of what he would achieve or the destination he would reach, just the doing of it.

But as Christians, we know there's a different way. As Jesus told Peter by the Sea of Tiberius: "Truly, truly, I say to you, when you were young, you girded yourself and walked where you would; but when you are old, you will stretch out your hands, and another will gird you and carry you where you do not wish to go.” (This he said to show by what death he was to glorify God.) And after this he said to him, “Follow me.” (John 21: 18-19) Emphasis added!

In 2013/2014, The Paris Review published an on-line series on the Inferno and Alexander Aciman offered his insights into this passage from the Inferno, citing another poem inspired by Ulysses by the Greek poet C.P. Cavafy about the adventurer's journey to Ithaca:

As you set out for Ithaka
hope the voyage is a long one,
full of adventure, full of discovery.
Laistrygonians and Cyclops,
angry Poseidon—don’t be afraid of them:
you’ll never find things like that on your way
as long as you keep your thoughts raised high,
as long as a rare excitement
stirs your spirit and your body.
Laistrygonians and Cyclops,
wild Poseidon—you won’t encounter them
unless you bring them along inside your soul,
unless your soul sets them up in front of you.

Hope the voyage is a long one.
May there be many a summer morning when,
with what pleasure, what joy,
you come into harbors seen for the first time;
may you stop at Phoenician trading stations
to buy fine things,
mother of pearl and coral, amber and ebony,
sensual perfume of every kind—
as many sensual perfumes as you can;
and may you visit many Egyptian cities
to gather stores of knowledge from their scholars.

Keep Ithaka always in your mind.
Arriving there is what you are destined for.
But do not hurry the journey at all.
Better if it lasts for years,
so you are old by the time you reach the island,
wealthy with all you have gained on the way,
not expecting Ithaka to make you rich.

Ithaka gave you the marvelous journey.
Without her you would not have set out.
She has nothing left to give you now.

And if you find her poor, Ithaka won’t have fooled you.
Wise as you will have become,so full of experience,
you will have understood by then what these Ithakas mean.

Until we are in Heaven--where we hope to go after our journey's end--we are torn between being home and being some where else, on the way, seeing new things, hoping to see new things when we get home. We need to think more of how to glorify God and serve others rather than how to satisfy ourselves. Perhaps that's the lesson of "Cruel Ulysses".
Posted by Stephanie A. Mann at 12:00 AM