The Act of Toleration, after being passed in Parliament, was approved on May 24, 1689 by William and Mary (1 Will & Mary c 18). The long title of the Act reveals its limited scope: An Act for Exempting their Majesties Protestant Subjects dissenting from the Church of England from the Penalties of Certain Laws (modern spelling). It was limited to allowing some freedom of worship to some dissenters. Catholics and Unitarians were excluded from the Act of Toleration.

The Protestants who dissented from the Church of England (Baptists, Methodists, Presbyterians, etc.) were not "granted" freedom of religion and the Church of England remained the established church--its members had all the privileges of citizenship. England would certainly be protected from the dangers of Catholicism, as this paragraph emphasizes:

Provided always and bee it further enacted by the authorities aforesaid That neither this Act nor any Clause Article or Thing herein contained shall extend or be construed to extend to give any ease benefit or advantage to any Papist or Popish Recusant whatsoever or any person that shall deny in his Preaching or Writing the Doctrine of the Blessed Trinity as it is declared in the aforesaid Articles of Religion. 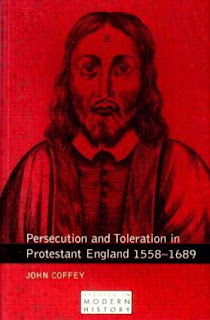 This book explores the progress of religious toleration through the seventeenth century in England:

The seventeenth century is traditionally regarded as a period of expanding and extended liberalism, when superstition and received truth were overthrown. The book questions how far England moved towards becoming a liberal society at that time and whether or not the end of the century crowned a period of progress, or if one set of intolerant orthodoxies had simply been replaced by another.

The book examines what toleration means now and meant then, explaining why some early modern thinkers supported persecution and how a growing number came to advocate toleration. Introduced with a survey of concepts and theory, the book then studies the practice of toleration at the time of Elizabeth I and the Stuarts, the Puritan Revolution and the Restoration. The seventeenth century emerges as a turning point after which, for the first time, a good Christian society also had to be a tolerant one.

Persecution and Toleration is a critical addition to the study of early modern Britain and to religious and political history.

But the difficulty for such an argument is that Catholics and Quakers were so completely shut out of the progress for toleration--except for under James II's Declaration of Toleration (1687 and 1688) which opened England up to freedom of religion:

We do likewise declare, that it is our royal will and pleasure, that from henceforth the execution of all and all manner of penal laws in matters ecclesiastical, for not coming to church, or not receiving the Sacrament, or for any other nonconformity to the religion established, or for or by reason of the exercise of religion in any manner whatsoever, be immediately suspended; and the further execution of the said penal laws and every of them is hereby suspended.

And to the end that by the liberty hereby granted, the peace and security of our government in the practice thereof may not be endangered, we have thought fit, and do hereby straightly charge and command all our loving subjects, that as we do freely give them leave to meet and serve God after their own way and manner, be it in private houses or in places purposely hired or built for that use, so that they take especial care, that nothing be preached or taught amongst them which may any ways tend to alienate the hearts of our people from us or our government; and that their meetings and assemblies be peaceably, openly, and publicly held, and all persons freely admitted to them; and that they do signify and make known to some one or more of the next justices of the peace what place or places they set apart for those uses.

And that all our subjects may enjoy such their religious assemblies with greater assurance and protection, we have thought it requisite, and do hereby command, that no disturbance of any kind be made or given unto them, under pain of our displeasure, and to be further proceeded against with the uttermost severity. (from the 1687 version)

And yet, John Coffey gives only ten (10) pages to considering James II and Toleration in his book (according to the Table of Contents)!
Posted by Stephanie A. Mann at 12:30 AM

Email ThisBlogThis!Share to TwitterShare to FacebookShare to Pinterest
Labels: Act of Toleration, Declaration of Indulgence, James II, religion in England, religious liberty, The Stuart Dynasty, William and Mary of England