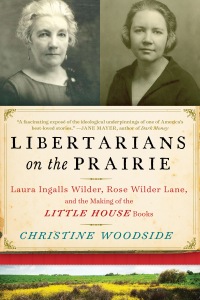 In 2012, the Library of America published a hardcover, slipcased edition  of the Little House on the Prairie books. A review of the books in the Wall Street Journal by Meghan Clyne emphasized certain aspects of the books, their composition, and their theme:

The fictionalized account of a girl's transformation into a young woman is also the story of America's growth and maturation. Wilder's stories for children document the Westward Expansion and explore surprisingly grown-up themes—the nature of self-government, the responsibilities that go along with freedom and what it means to be an American.

Essential to understanding those themes is the fact that Wilder wrote the "Little House" books during the Depression and New Deal, at a time when she saw the nation sliding into an unhealthy dependency on government. In addition to educating American children about a crucial period of their history, Wilder wanted to show them a freer way of life. "Self reliance," she explained in a speech in the winter of 1935-36, is one of the "values of life" that "run[s] through all the stories, like a golden thread."

The "Little House" books are virtual manuals of self-provision, with exhaustive descriptions of how the Ingalls and Wilder families secured their own food, shelter, clothing, education and entertainment through the work of their own hands. In "Little Town on the Prairie," for instance, a flock of blackbirds destroys the crops that the family is relying on to make ends meet, but the setback is no match for Ingalls ingenuity. Pa kills the blackbirds and Ma uses them to feed the family, even turning them into a pot pie. "The underside was steamed and fluffy," Wilder wrote. "Over it [Pa] poured spoonfuls of thin brown gravy, and beside it he laid half a blackbird, browned, and so tender that the meat was slipping from the bones." " 'It takes you to think up a chicken pie, a year before there's chickens to make it with,' Pa said."

If Wilder's pioneer families are resourceful, government is depicted as meddling and incompetent—a contrast that emphasizes the importance of providing for oneself. Indeed, Washington's bungling is blamed for the Ingallses' forced departure from Indian Territory in "Little House on the Prairie," and in "The Long Winter" a family friend denounces politicians who "tax the lining out'n a man's pockets" and "take pleasure a-prying into a man's affairs." Fear of debt hangs over these stories like a dark cloud; to be "beholden" to anyone is a mark of shame. The only respectable path to subsistence—let alone comfort—is hard work. "Neither [my parents] nor their neighbors begged for help," Wilder explained in a 1937 speech. "No other person, nor the government, owed them a living."

This book provides great background on those themes of independence and explains in fact the philosophical underpinnings of the books, based upon the shared values of the mother and daughter who wrote them: Libertarianism.

From the publisher, Arcade:

Generations of children have fallen in love with the pioneer saga of the Ingalls family, of Pa and Ma, Laura and her sisters, and their loyal dog, Jack. Laura Ingalls Wilder's Little House books have taught millions of Americans about frontier life, giving inspiration to many and in the process becoming icons of our national identity. Yet few realize that this cherished bestselling series wandered far from the actual history of the Ingalls family and from what Laura herself understood to be central truths about pioneer life.

In this groundbreaking narrative of literary detection, Christine Woodside reveals for the first time the full extent of the collaboration between Laura and her daughter, Rose Wilder Lane. Rose hated farming and fled the family homestead as an adolescent, eventually becoming a nationally prominent magazine writer, biographer of Herbert Hoover, and successful novelist, who shared the political values of Ayn Rand and became mentor to Roger Lea MacBride, the second Libertarian presidential candidate. Drawing on original manuscripts and letters, Woodside shows how Rose reshaped her mother's story into a series of heroic tales that rebutted the policies of the New Deal. Their secret collaboration would lead in time to their estrangement. A fascinating look at the relationship between two strong-willed women, Libertarians on the Prairie is also the deconstruction of an American myth.

The Little House Books should have two names on their covers as the authors, mother and daughter: Laura Ingalls Wilder and Rose Wilder Lane. The mother had the memories and the descriptive power, while the daughter had the narrative skill and the publishing connections to get the books in print. In Christine Woodside's  interpretation of their collaboration, Lane rather took over the direction of the last few books as her own interest and commitment to Libertarianism increased during the Depression and World War II. In addition to telling the story of how these incredibly popular books came to be written, Woodside's book provides insights into the career of a writer, Lane, who was writing for a living: submitting stories and articles, tracking her submissions, waiting for the checks, balancing her budget, making connections and finding writing or editorial jobs, etc. Her formal education ends with the eighth grade, but Lane's foreign travel, language skills, and intelligence clearly fostered her writing career. Woodside also provides a thumbnail sketch of Libertarian party history, including the interest of the Koch brothers, whose companies are headquartered in my hometown, Wichita, Kansas.

Woodside cannot completely unravel the mystery of who wrote what, because not all of the manuscripts are extant. She is not the first to deconstruct the "American myth" of Laura Ingalls Wilder's extraordinary literary achievement. The first writer to do that received hate mail! She also tries too often to understand motivation, especially Rose's, using a comment like "perhaps she was tired" as an explanation. When Woodside can't find some documentation, she conjectures that "maybe they discussed it on the telephone".

For all their collaboration, mother and daughter are not close. Their conflicts, sadly, are engendered by their attitudes to money and debt. Neither wants to be indebted to the other and that includes love and affection: they are misers. They are not misers (of love or money) because of Libertarianism , however, because their estrangement, partial or complete, dates from before Rose's adoption of that philosophy. As generous as she is to her parents when she finds some great success and they need help, she doesn't feel appreciation from her parents because everything is measured in terms of debt and repayment.

Fascinating book: I checked it out from the public library!

My husband and I like to spend a few days on the White River in Arkansas every few months. Perhaps we'll work in an overnight stop at the Laura Ingalls Wilder Historic Home and Museum in Mansfield, Missouri!
Posted by Stephanie A. Mann at 12:30 AM