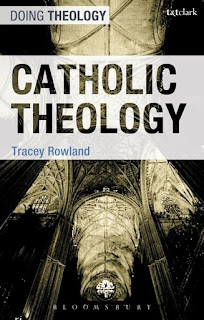 Tracey Rowland has written extensively about the theological works of Joseph Cardinal Ratzinger/Pope Benedict XVI. Carl Olson of the Catholic World Report interviewed her about her latest book, Catholic Theology, which I have in my queue to read:

Theologian, professor, and author Tracey Rowland holds two doctorates in theology, one from the Divinity School of Cambridge University (the civil PhD) and one from the John Paul II Institute at the Pontifical Lateran University (the pontifical STD) in addition to degrees in law and philosophy. After studies at the University of Queensland, she lectured in Soviet and Central European Politics at Monash University while completing a Masters degree in contemporary Central European political theory. From 1994-1996 she was a Research Fellow in the Faculty of Law at Griffith University with a focus on jurisprudence and Constitutional and Administrative Law. In 1996 she won a Commonwealth Scholarship to Cambridge University to work on her doctorate. Prior to joining the faculty at the University of Notre Dame (Australia), she was the Dean of the John Paul II Institute in Melbourne for sixteen years. In 2014 she was appointed to the International Theological Commission and she is currently a member of the ITC's sub-commission on religious freedom.

Her books include Culture and the Thomist Tradition: After Vatican II (London: Routledge, 2003), Ratzinger's Faith (Oxford University Press, 2008), Benedict XVI: A Guide for the Perplexed (London: Bloomsbury, 2010), the recently published Catholic Theology (London: Bloomsbury, 2017), and the forthcoming The Culture of the Incarnation: Essays in Catholic Theology (Ohio: Emmaus Academic, 2017). She recently corresponded with Carl E. Olson, editor of Catholic World Report, about her book Catholic Theology, the various (and often competing) schools of Catholic theology today, the crisis since Vatican II, and why theology is so important.

As I read the interview, I noticed how it really synced up with a presentation at the Spiritual Life Center I'd recently attended, “Vatican II: Continuity or Disruption? Examining the Reception and Interpretation of the Conciliar Documents.” Perhaps the presenter, Father Patrick Reilley, read her book, because he discussed the two basic schools of thought about the Council, represented by the journals Concilium and Communio that Rowland highlights in two chapters of the book and in the interview.
Posted by Stephanie A. Mann at 12:30 AM