Chesterton on St. Francis of Assisi 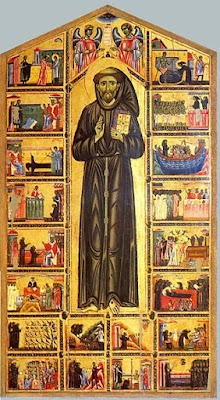 Our Greater Wichita Chesterton Society group gathers on the second floor of Eighth Day Books this Friday at 6:30 p.m. to begin G.K.C.'s book about St. Francis of Assisi. Dale Ahlquist of the American Chesterton Society comments on the book:

Chesterton’s ten “biographies” are more like commentaries rather than accounts of the life and work of their subjects. Heavy on the analysis, light on the narrative. Even lighter on the facts. His subjects sometimes even appear to be secondary to the larger themes he wishes to discuss. His book on St. Francis, however, is unlike any of his other biographies. There are many more facts. The narrative is quite straightforward and highly dramatic. The analysis is supportive rather than overwhelming. Chesterton’s other biographies are really overwhelmed by Chesterton (which, in most cases, is what we would prefer); this one, however, is rightly filled to overflowing by the great saint of Assisi. Chesterton not only gets St. Francis to speak for himself, he does it in the way the little friar would have preferred: by conveying not his words, but his life. Chesterton describes St. Francis as “a poet whose whole life was a poem.”

This is the first real book written after Chesterton’s reception into the Catholic Church, the others being collections of poems, essays, and mysteries. Yet, we cannot sense much transition in Chesterton’s writing. One reason is that his conversion was the culmination of a long steady process in which he never really changed his way of thinking. It was more of a full flowering of all the ideas he had him. There is another reason, and it has to do with St. Francis. Chesterton had always admired this saint. Francis, he says, and “never been a stranger” to him and was like a bridge connecting Chesterton’s early literary life with the later.

We are reading the Ignatius Press edition (available at Eighth Day Books) that includes Chesterton's study of St. Thomas Aquinas: at our first meeting we'll discuss the Introduction by Joseph Pearce and the first chapter, "The Problem of St. Francis". Refreshments will be served.
Posted by Stephanie A. Mann at 12:30 AM