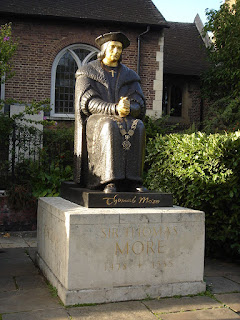 Anne Fiennes (Sackville), Lady Dacre, died on May 14, 1595 and was buried in the Chelsea Old Church, where St. Thomas More had planned to rest with both his first wife, Jane, and his second, Alice. Anne was the heiress of More's Chelsea estates, according to this biography:

FIENNES or FIENES, ANNE LADY DACRE (d. 1595), was daughter of Sir Richard Sackville, treasurer of the exchequer to Elizabeth, and steward of the royal manors in Kent and Sussex, who was the son of Sir John Sackville (d. 1557), and Anne, daughter of Sir William Boleyn, uncle to Queen Anne Boleyn. Her mother was Winifred, daughter of Sir John Bridges, lord mayor of London, who after Sir Richard Sackville's death became the second wife of William Paulet, marquis of Winchester. Lady Dacre was sister to Elizabeth's trusted counsellor, Thomas Sackville, lord Buckhurst. She married Gregory Fienes [q. v.], son of Thomas Fienes, lord Dacre [q. v.], executed in 1541, who with his sister Margaret was restored in blood and honours in 1558. By her husband, with whom, according to her epitaph, she lived with much affection, she had no issue. She appears from the State Papers to have been a woman of strong mind and somewhat imperious and exacting disposition. She was at one time at variance with her brother, Lord Buckhurst, at another she addressed a long complaint to Elizabeth against her husband's sister, Margaret Lennard, for raising false reports concerning her, and endeavouring to prejudice her majesty against her. Her husband had incurred debts, for the discharge of which he desired to sell some portions of his estates, which Mrs. Lennard as his next heir sought to prevent, and at the same time desired to have lands settled on herself to her brother's prejudice (State Papers, Dom. vol. xxvi. Nos. 37–9). On the death of her mother, the Marchioness of Winchester, she came into possession of Sir Thomas More's house at Chelsea, which after his execution had been granted to William Paulet, marquis of Winchester. Here she and her husband made their home, her brother, Lord Buckhurst, often residing with them. Lord Dacre died at Chelsea on 25 Sept. 1594. She survived him only a few months, dying in the same house on 14 May 1595. Only a few weeks before her decease she had to defend herself from the charge of wishing to appropriate her husband's estate to herself (ib. 9 April 1592, No. 120). She and her husband were buried in the More Chapel in Chelsea Old Church, where, by her desire, a very magnificent marble monument was erected, exhibiting their effigies of full size under a Corinthian canopy, richly adorned with festoons of flowers. Her epitaph describes her in very laudatory terms as

On the rebuilding of the church in 1667 this monument was removed to the south aisle. By her will, which is a long and very interesting document couched in a deeply religious spirit (Lansdowne MSS. lxxvii. Nos. 29, 30), dated 20 Dec. 1594, three months after her husband's decease, Lady Dacre made provision for the erection of an almshouse for twenty poor persons, ten of each sex, and a school for twenty poor children, in pursuance of a plan she and her husband had hoped to complete in their lifetime, the funds for its support being charged on the manor of Brandesburton in Yorkshire. The whole of her manors, lands, and houses at Chelsea, Kensington, and Brompton she bequeathed to Lord Burghley and his heirs. She begged the queen's acceptance of a jewel worth 300l., as ‘a poor remembrance of her humble duty for her manifold princely favours to her husband and herself.’ To her brother, Lord Buckhurst, she left, with other jewels, her majesty's picture, set round with twenty-six rubies, with a pendent pearl, ‘as a special remembrance of her love, being a guifte she very well did know would of all other things be most pleasing and acceptable unto him.’ The will contains many bequests to her gentlewomen and servants, not one of whom seems to be forgotten.

The Center for Thomas More Studies offers this sketch of his estate. Even though More was not interred there, Anne Dacre chose to be buried in his tomb, perhaps stressing the Chelsea connection. His tomb, with the epitaph he wrote--and sent a copy of to Erasmus--survived bombing in World War II.

After describing his career, Thomas More added this praise of his two wives with a humorous twist:

Within this tomb Jane, wife of More, reclines;
This More for Alice and himself designs.
The first, dear object of my youthful vow,
Gave me three daughters and a son to know;
The next—ah! virtue in a stepdame rare!—
Nursed my sweet infants with a mother’s care.
With both my years so happily have past,
Which most my love, I know not—first or last.
Oh! had religion destiny allowed,
How smoothly mixed had our three fortunes flowed!
But, be we in the tomb, in heaven allied,
So kinder death shall grant what life denied.

Image Credit: statue of Thomas More outside Chelsea Old Church.
Posted by Stephanie A. Mann at 12:30 AM