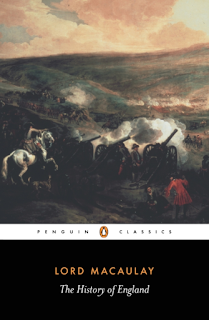 I found this resource from the University of Cambridge for prospective undergraduate history majors. One of their topics is "The Whig Tradition" of English history, focused on Thomas Babington Macaulay's The History of England:

This important strand in British historiography derives its name from one of the two main political parties in parliament in the eighteenth and nineteenth centuries; the other party were known as Tories. Whigs tended to stress the importance of parliament, as a counterbalance to the Crown and of the Church of England; Tories were much more deeply attached to the power and authority of Crown and Church.

The Whig view of history grew out of the unprecedented strength and prosperity of mid-nineteenth century Britain, which led the world in scientific and technological development and ruled an empire which stretched from Canada to South Africa, India, Australia, New Zealand and the Caribbean. It is little wonder that the Victorians saw themselves as the heirs to the Romans, but with one important difference: instead of an autocratic emperor, the British had a limited, parliamentary monarchy which, they believed, placed Britain on a higher moral plane; as a result the Victorians tended to revere institutions such as parliament, the Church of England, the legal system, the universities and the monarchy, as components of a perfectly balanced constitution, a model for other countries to follow. When the Victorians asked themselves how they had come to live in such an apparently perfect society, they looked for an explanation to the history of England. . . .

Central to the Whig interpretation of history was the long conflict between Crown and Parliament that dominated the seventeenth century. While they regretted the bloodshed of the Civil War and the execution of King Charles I, the Whigs saw the defeat of the Crown and its subjugation to Parliament as essential to the establishment of a free society. However, in 1660 the Stuart monarchy returned. King Charles II, and especially his Catholic brother, James II, seemed to pose a formidable threat to the supremacy of parliament and appeared to be trying to establish Catholic autocratic rule in England. How, in the crucial year 1688, parliament was able to snatch victory from the jaws of defeat and lay the foundations for the prosperity of Victorian Britain was the story that the Whig writer and administrator Thomas Babington Macaulay set out to tell in his History of England.

Macaulay was a firm believer in the superiority and moral integrity of Britain's institutions. As a member of the government of British India he had dismantled the previous education system by which British administrators learned about the history, languages and culture of India, in favour of an entirely western curriculum, declaring scornfully that there was more value in a shelf of western authors than in the whole literary culture of the east. He applied much the same bumptious self-confidence to his reading of English history, which he sought to relate in an engaging style that, he hoped, would make his book as popular a read as the latest novel. In that aim he certainly succeeded.

The site then offers an excerpt from Macaulay and analyses his method, language, and use of sources. Other topics are addressed on this site, including the discipline of social history, different views the Crusades, etc.
Posted by Stephanie A. Mann at 1:00 AM

Email ThisBlogThis!Share to TwitterShare to FacebookShare to Pinterest
Labels: The History of England, The University of Cambridge, The Whig Interpretation of History, Thomas Babington Macaulay