The O'Neill Dies in Rome 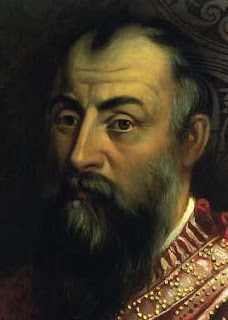 Hugh O'Neill, Earl of Tyrone, "The O'Neill", died on July 20, 1616, in Rome. He is buried in San Pietro in Montorio, famous for Bramante's Il Tempietto. HistoryToday.com provides this background on his conflict with Elizabeth I and his final exile to Rome:

O’Neill surrendered to the English the following year on the day before Queen Elizabeth’s death. He went to London and met the new king, James I who, it seemed for a time, would be more understanding, but after the Gunpowder Plot of 1605 patience with Catholicism ran out and the English regime returned to the whittling away of the O’Neill and O’Donnell estates. Hugh O’Neill hoped to argue his case again in London, but Red Hugh’s successor, his younger brother Rory O’Donnell, Earl of Tyrconnel, decided to get away abroad. O’Neill realized that the English would take this to mean he was plotting another uprising and that he himself would be implicated. He decided he must go too and said a sad farewell to his friends.

O’Neill and O’Donnell and more than ninety followers set sail in a French ship from Rathmullan in Donegal. They landed in Normandy, went on to the Spanish Netherlands and were quickly packed off to Italy, where the pope provided them with a house in Rome paid for by Philip of Spain. Pleas for Spanish help in Ireland were ignored. The English government was surprised and delighted by the departure of the earls, which in the opinion of the attorney-general of Ireland, Sir John Davies, enabled it to complete the work of St Patrick, who ‘did only banish the poisonous worms, but suffered the men full of poison to inhabit the land still.’ O’Donnell soon died, in 1608, and was buried in the church of San Pietro di Montorio. British agents keeping an eye on O’Neill in Rome reported that after a good dinner he liked to talk of the prospect of ‘a good day in Ireland’.

Hugh O’Neill never saw his good day in Ireland. Almost blind in his final years, he died of fever in 1616 in his sixties and was interred beside O’Donnell. The Protestant plantation of Ulster proceeded apace and the flight of the earls would be the first of many departures from Ireland by native Irish over the following centuries.

You can see the marker for his grave on the church's website.

Image credit
Posted by Stephanie A. Mann at 12:30 AM