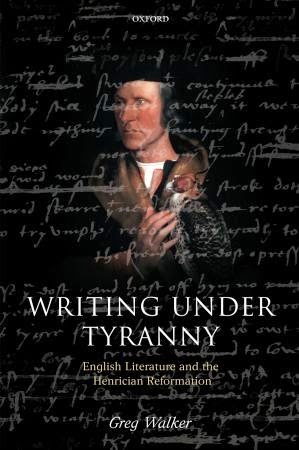 Sir Thomas Elyot, born around 1490, son of Sir Richard Elyot, died March 26, 1546. According to The Cambridge History of English and American Literature, Volume III Renascence and Reformation:
Elyot had no university training. He was educated at home and, at a comparatively early age, had acquired a good knowledge of Latin, Greek and Italian. He says that, before he was twenty, he had read Galen and other medical writings with a “worshipful physician,” conjectured to have been Linacre.His earliest work, The Boke of the Governour, the best known of his writings, made him famous and probably proved his introduction to the career as a diplomatic agent in which he spent the greater part of his life. It is a lengthy and exhaustive treatise on the education which those who are destined to govern ought to receive. It begins with a discussion of the various kinds of commonwealths, and sets forth the advantages of monarchy, aristocracy and democracy. The author decides that monarchy is the best form of government; but it demands the appointment of subordinate rulers over the various parts of the kingdom who are to be the eyes, ears, hands and legs of the supreme ruler. They ought to be taken from the “estate called worshipful,” provided they have sufficient virtue and knowledge, but they must be carefully educated. It is the more necessary to insist upon this as education is not valued as it ought to be. Pride looks upon learning as a “notable reproach to a great gentleman,” and lords are apt to ask the price of tutors as they demand the qualification of cooks. . . . Elyot’s reputation among his contemporaries rested on more than his Boke of the Governour. He wrote The Castel of Helth, full of prescriptions and remedies largely selected from Galen and other medical authorities of antiquity. His two tracts: A swete and devoute sermon of Holy Saynt Ciprian, of Mortalitie of Man and The Rules of a Christian lyfe made by Picus, erle of Mirandula, both translated into Englyshe, provided food for the soul. His translations from Latin and Greek into English, made at a time when all were anxious to share in classical learning, and only a few possessed a knowledge of the classical languages sufficient to enable them to share its benefits, were very popular and were reprinted over and over again. To this class belong: The Doctrine of Princes, made by the noble oratour Isocrates, and translated out of Greke in to Englishe; The Bankette of Science (a collection of sayings translated from the Fathers); The Education or Bringinge up of Children, translated out of Plutarche; The Image of Governance, compiled of the actes and sentences notable of the moste noble Emperour Alexander Severus, late translated out of Greke into Englyshe and others of a like kind. Henry VIII himself encouraged Elyot in the compilation on his Latin-English lexicon: The Dictionary of Syr T. Eliot, knyght, with its later title, Bibliotheca Eliotae. This dictionary and his translations continued to be appreciated in a wonderful manner for two generations at least. If Erasmus popularised the classical renascence for scholars, Elyot rendered it accessible to the mass of the people who had no acquaintance with the languages of antiquity.

Elyot was also a friend of Sir Thomas More, a friendship with did not help him at Court during the 1530's. He acknowledged that friendship but protested his loyalty to Henry VIII was greater. When he traveled on diplomatic missions to persuade Charles V, the Holy Roman Emperor to be more positive about Henry VIII's annulment of his marriage to Katherine of Aragon, he was accused of being lukewarm in his efforts. Although Elyot was involved in the suppression of the monasteries, but he did not benefit or receive any spoils. Like More, he was a proponent of education for women and he married one of Thomas More's students, Margaret Barrow. In 1540 he wrote The Defence of Good Women, espousing the view that an educated wife would be an excellent companion for her husband. Queen Zenobia of Palmyra in that book may represent Queen Katherine of Aragon, who was certainly well-educated and concerned for the education of the Princess Mary.

According to this review of Greg Walker's 2005 book, Writing Under Tyranny: English Literature and the Henrician Reformation, Elyot was indeed frustrated by his lack of success in Henry's Court:

The five chapters in section two describe and discuss the works of Sir Thomas Elyot within the context of the King's 'Great Matter', and the repeated frustrations of Elyot's desire for public office. Elyot's literary career apparently tracked his political one as he moved from the early optimism of his prescriptive work, The Book Named the Governor (1530–31), to the later reworking of classical Roman history in The Image of Governance (1540–41), which is read here, alongside Uwe Baumann's arguments from 1998–9 (for example), as a satire on contemporary life. Elyot's preface to this later book only paid lip-service to 'a measured defence of the Henrician via media' (p. 160), as Professor Walker, following George Bernard, describes Henry's 'chosen' religious policy of these years.

Elyot's fruitless search for a job at the centre of government, in particular a place on the privy council, and his real or imagined sense of grievance against Thomas Cranmer who succeeded where Elyot failed, is a familiar story. Its poignancy and its impact on his writing have also been discussed by Elyot's several biographers and by Professor Walker, briefly, in another book, but the detail and the clarity of its exposition here are to be welcomed. This section has a good narrative structure, and gives Elyot's story a satisfying emotional, as well as intellectual, coherence.

Elyot was on another diplomatic mission to the Court of the Holy Roman Emperor when Thomas More was tried, condemned and executed. He heard of his friend's death from Charles V, and was much distressed. Elyot did not profit at all from his work for Henry VIII because as a diplomat he bore the expenses of travel and hospitality. He had an estate in Carlton, Cambridgeshire and was buried in St. Peter's Church there.
Posted by Stephanie A. Mann at 12:30 AM