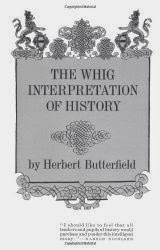 This is the book I'd ordered at Eighth Day Books--Butterfield's famous analysis of The Whig Interpretation of History.

It seems that many of the books I've been reading lately--from Chesterton's The Well and the Shallows, to a novel my husband just got me started on (Michael O'Brien's Father Elijah) and even Newman's "The Second Spring" sermon I quoted from on Monday--are talking about progress. What is progress? When or how do we know that we have progressed? What if we doubt that we have progressed at all?

This kind of history always assumes that we have achieved greater moral clarity, more civilized forms of government and legislation, a freer society, etc--and therefore we can look back on the past to point out moral failures and crimes. It does not try to understand the past but identify those people or events that aided the progress that has created our morally superior world and also those that tried to hold back progress.

Butterfield uses the example of Reformation History under the whig theory throughout his essay: Protestantism defeated Catholicism and so now we have a better world. If Catholicism had won, we would be stuck in the Middle Ages, because of course the Catholic Church would always have prevented progress! It would have always been against science, freedom, development of peoples, etc. One might almost think that Butterfield was a Catholic from the way he defends the Catholic Church from this view of history, but no, he was a Methodist.

What Butterfield proposes for the historian to do is find out and tell--like a travel guide for people who will never travel to the places she describes--what life was like in the past. He wants the historian to describe the past, not judge it for its influence on the present.

According to this article from First Things, Lord John Acton was Butterfield's target:

In this respect, Butterfield found particular fault in the writings of Lord Acton, a historian whom he otherwise greatly admired, but against whom much of the argumentative force of Whig Interpretation was directed. That Acton was himself a notable member of that shrinking band of believing Christian historians, and a Catholic to boot, and that Butterfield himself was a Whig by default, only adds further ironies to the mix.

The tendencies Butterfield resisted were illustrated in Acton’s 1895 inaugural address on assuming the Regius chair. In that address, Acton issued a rebuke to one of the chief characteristics of historicism: its insistence on confining the historian’s moral judgment to the specific historical contexts in which the actions under review took place. Acton embraced historicism as a method but drew a line against its tendency toward relativism. Instead, he offered a ringing defense of the historian as moral arbiter, urging his audience “never to debase the moral currency or lower the standard of rectitude, but try others by the final maxim that governs your own lives, and to suffer no man and no cause to escape the undying penalty which history has the power to inflict on wrong.”

In other words, as we might say today, the historian should not hesitate to impose his values on the past. And Acton was in no doubt about the general direction of history’s movement: “I hope . . . this will aid you to see that the action of Christ who is risen on mankind whom he redeemed fails not, but increases; that the wisdom of divine rule appears not in the perfection but in the improvement of the world; and that achieved liberty is the one ethical result that rests on the converging and combined conditions of advancing civilization. Then you will understand what a famous philosopher said, that History is the true demonstration of Religion.”

While Butterfield was thinking of Acton when he wrote this, I was thinking of Thomas Cahill as I read it. He seems to be our time's great Whig historian. As he writes his "Hinges of History" series, he is, as one reviewer said of the latest volume, on the Renaissance and the Reformation, writing about the past to find traces of the present. The book is

essentially a search through history for characters presenting features that appear “modern” to the searcher. He then provides lively biographical vignettes that emphasize these features, and (as it were) announces—“Voila, modernity in the Renaissance (or Reformation).” . . . In the end, Heretics and Heroes is not an attempt to understand, or explain, the past from the perspective of the people of the past. It is a history of progress towards us, or, rather, towards those of us who are truly modern, in the right way. It is a peculiar kind of hagiographical enterprise—the scouring of history to find the people that are most like us.

The First Things article points out some of the weaknesses of Butterfield's study, but with books like Heretics and Heroes still around, it's clear that we need to be reminded of its lessons.
Posted by Stephanie A. Mann at 12:30 AM