Chesterton's Sanctity in THE ATLANTIC 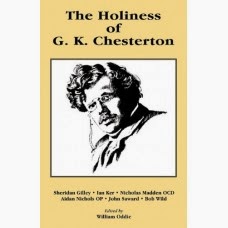 If the Catholic Church makes G. K. Chesterton a saint—as an influential group of Catholics is proposing it should—the story of his enormous coffin may become rather significant. Symbolic, even parabolic. Chesterton’s coffin was too huge, you see, to be carried down the stairs of his house in Beaconsfield, its occupant being legendarily overweight at the time of his death, in 1936. So it went out a second-floor window. Very Chestertonian: gravity, meet levity. Hagiographers might pursue the biblical resonance here, citing the Gospel passages in which a paralyzed man, unable to penetrate the crowds surrounding the house in Capernaum where Jesus was staying, is lowered in through a hole in the roof. Or they might simply declare that Gilbert Keith Chesterton’s was a spirit too large to go out through the conventional narrow door of death—that it had to be received, as it were, directly into the sky.

In his vastness and mobility, Chesterton continues to elude definition: He was a Catholic convert and an oracular man of letters, a pneumatic cultural presence, an aphorist with the production rate of a pulp novelist. Poetry, criticism, fiction, biography, columns, public debate—the phenomenon known to early-20th-century newspaper readers as “GKC” was half cornucopia, half content mill. If you’ve got a couple of days, read his impish, ageless, inside-out terrorist thrillerThe Man Who Was Thursday. If you’ve got an afternoon, read his masterpiece of Christian apologetics Orthodoxy: ontological basics retailed with a blissful, zooming frivolity, Thomas Aquinas meets Eddie Van Halen. If you’ve got half an hour, read “The Blue Cross,” the first and most glitteringly perfect of his stories featuring the crime-busting village priest Father Brown. If you’ve got only 10 minutes, read his essay “A Much Repeated Repetition.” (“Of a mechanical thing we have a full knowledge. Of a living thing we have a divine ignorance.”)

Our G.K. Chesterton reading group meets tomorrow night at Eighth Day Books (on the second floor at the table among books about Church history, the Bible, and education) at 6:30 p.m. We are reading The Well and the Shallows.

G. K. Chesterton was one of the most provocative and well-loved English writers of the 20th century. Renowned for his journalism and as an essayist, he was the author of around eighty books, some two hundred short stories, four thousand essays and several plays. His writing ranged from fiction and poetry, to history, philosophy, political, social and literary criticism, theology and Catholic apologetics. His works reflect a life that was filled with wonder and joy, a constancy in fighting for the Christian faith in a world losing belief, a lifelong devotion to the Blessed Virgin and his love for all men, especially the poor. But are these grounds for his canonisation? The late Cardinal Emmett Carter described G. K. Chesterton, on the 50th anniversary of his death as one of the “holy lay persons” who have exercised a truly prophetic role within the Church and the world.
Posted by Stephanie A. Mann at 12:30 AM