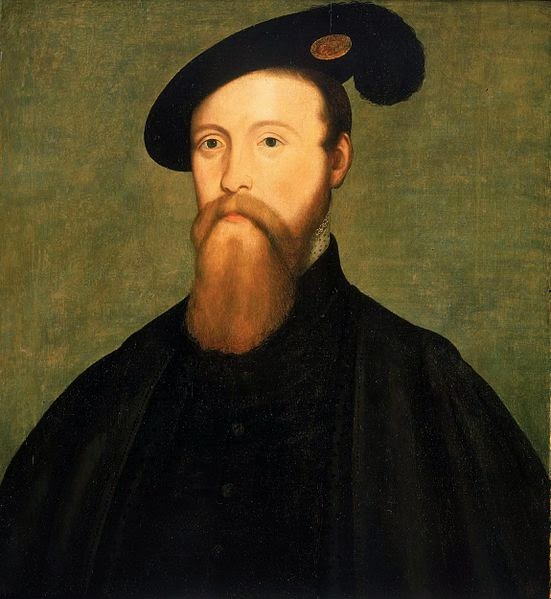 Thomas Seymour, one of Edward VI's uncles, died on the block on March 20, 1549 at the age of 41. He left a baby daughter, Mary, whose mother, Catherine Parr (Henry VIII's last wife) had died in childbirth. Seymour was the 1st Baron Seymour of Sudeley and had been Lord High Admiral of England, but he was accused of treason against Edward VI. Seymour's brother was Lord High Protector, Edward Seymour, 1st Duke of Somerset, who would also die at the block during Edward's reign.

The young Princess Elizabeth had lived with Parr and Seymour for a time after Henry VIII's death, but was removed from the household after Catherine Parr noticed the untoward behavior of Seymour toward Elizabeth. Lady Jane Grey was also in their care and she was in the household when Parr gave birth to her only child, Mary; this was her fourth marriage. Parr died after Mary's birth (surely named after the Princess Mary?).

This orphaned baby was placed in the care of Katherine Willoughby, the widow of Charles Brandon, the Duke of Suffolk (who had married Henry VIII's younger sister Mary). Although Katherine Willoughby was of Spanish descent--her mother was one of Catherine of Aragon's ladies-in-waiting and best friends--she was not a Catholic, but favored the Protestant cause. And, although she was friend of Catherine Parr's, Katherine did not appreciate being the guardian of this little baby girl.

Linda Porter writes about Seymour's fall and the fate of his little girl in this History Today article:

Without the steadying influence of Katherine Parr and perhaps suffering more from the effects of bereavement than has often been supposed, Thomas Seymour’s judgement, which had been unpredictable in the past, now deserted him completely. His resentment against the power and authority of his brother rankled, his own role in politics being ill-defined, and he began to develop schemes for raising the country in revolt and perhaps even marrying Elizabeth. Neither of these ideas was as hare-brained as they look with hindsight, but both were fraught with danger and Thomas lacked any real power-base from which to impose himself on England. Eventually he was caught apparently trying to kidnap Edward VI, who had been very fond of his younger uncle until he shot his pet dog in the ensuing fracas. The background to this incident remains murky but the campaign of vilification that swung into action to discredit Seymour was swift and relentless. Attainted and therefore never brought to trial, Thomas was executed for treason on March 17th, 1549 (sic), leaving Lady Mary an orphan at the age of seven months.

Thomas did not appoint any of his own or Katherine’s relatives as guardian to his daughter. He could scarcely have handed her to the brother who signed his death warrant and no one else among the extended Parr or Seymour families seems to have taken much interest in the child. Like most of his former ‘friends’, they were all trying to put as much distance between themselves and Thomas Seymour as possible. Instead, Katherine Brandon, Duchess of Suffolk, a close friend of Katherine Parr and a lady of seemingly unimpeachable reforming religious ideas, was appointed as guardian. It was not a charge she accepted with enthusiasm.

Despite her strong religious views, the duchess’s bosom was not full of Christian charity. Lady Mary may have been a dispossessed orphan, but she was an expensive one. As a queen’s daughter, she came with a household of her own, consisting of a lady governess, rockers, laundresses and other servants. The government was supposed to provide for her upkeep and the payment of her staff but the duchess could not get Somerset to part with the money until she appealed to William Cecil, then a prominent member of the duke’s household, to intervene on her behalf. The letter she wrote makes it clear how much she resented ‘the queen’s child’, as she frostily referred to the little girl.

The article concludes with what might have been the child's epitaph:

I whom at the cost
Of her own life
My queenly mother
Bore with the pangs of labour
Sleep under this marble
An unfit traveller.
If Death had given me to live longer
That virtue, that modesty, That obedience of my excellent Mother
That Heavenly courageous nature
Would have lived again in me.
Now, whoever
You are, fare thee well
Because I cannot speak any more, this stone
Is a memorial to my brief life