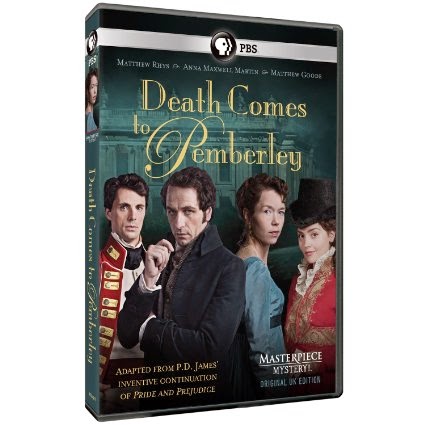 I watched part one of  Death Comes to Pemberley this Sunday, the BBC adaptation of P.D. James' mystery novel Austen pastiche. The actress playing Elizabeth Bennett Darcy is utterly miscast: Elizabeth should be pretty, happy, and witty. This lady has scraggly hair and when her sister Jane showed up the mistake in casting/makeup/styling was clear--Elizabeth's sister-in-law Georgiana is so beautiful too so the contrast is striking. She looked more like poor Anne Elliott than Elizabeth!

James evidently brings out--I have not read the book--some skeletons from the Darcy closet: bad blood between the Darcy's and a neighboring family and a wastrel ancestor. There are several mysteries at Pemberley: the murder of Wickham's friend Denny; Colonel Fitzwilliam's meeting with a mysterious lady; a baby whose parentage is unknown, and the ultimate question: will Elizabeth's and Darcy's marriage survive this debacle and the presence of her family and Lady Catherine de Bourgh!

The synopsis of episode one from PBS:

One the eve of the annual Lady Anne ball at their magnificent Pemberley estate, the silver gleams, the kitchen bustles with activity, the grounds evoke serenity and order, and alongside her husband Darcy, Pemberley's Lady Elizabeth presides. Together, they welcome their guests: Colonel Fitzwilliam, Darcy's severe cousin and a newly-minted heir in a dutiful search for a wife; young lawyer Henry Alveston, a sincere admirer of Darcy's gentle-natured sister Georgiana; and the histrionic Mrs. Bennet and her long-suffering husband. Unwelcome and uninvited are the Wickhams.

Yet the pre-ball festivities are brought to an abrupt halt when a coach races up to Pemberley carrying an hysterical Lydia Wickham, shrieking "Murder!" Darcy leads a search party and discovers the old thorn in his side, George Wickham, distraught and covered in blood, dragging the body of Captain Denny, whom he'd pursued mid-argument into the dark woods.

All evidence—now in the hands of the magistrate Hardcastle, an old Darcy adversary—points to Wickham's guilt. Has Wickham committed the ultimate crime? And innocent or not, will he finally damage Pemberley and its residents beyond repair?

Not to give anything away, but I do think one problem with the magistrate's case is: where is the murder weapon? Episode two airs next Sunday.
Posted by Stephanie A. Mann at 12:30 AM