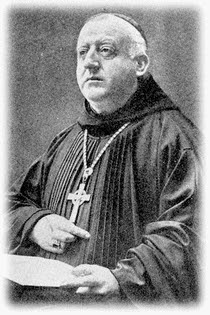 From Vultus Christi in Ireland:

Today is the feast of a great Irish saint! Born and educated in Dublin, Joseph Marmion served as a parish priest and seminary professor before becoming a Benedictine monk at the Abbey of Maredsous in Belgium. Dom Columba Marmion was elected of Abbot of Maredsous in 1909. He chose to receive the Abbatial Blessing on Rosary Sunday. It fell that year on October 3rd. When Pope John Paul II beatified Abbot Columba Marmion in 2000, the liturgical memorial of the new Blessed was fixed on the date of his Abbatial Blessing, rather than on the day of his death, January 30th.

In 1985 Pope John Paul II visited Belgium. When the papal helicopter flew over the Abbey of Maredsous on the way from Brussels to Beauraing, the Holy Father confided to one of his aides: “I owe more to Columba Marmion for initiating me into things spiritual than to any other spiritual writer.” The saints engender saints, and this in every age.

Cardinal Mercier, and Others

Cardinal Mercier, the holy Archbishop of Malines in Belgium and a contemporary of the Abbot wrote, after reading Christ, the Life of the Soul: “The perfume of Holy Scripture, to be breathed in at each page of this volume, gives the impression that it was conceived and prepared during prayer, at the foot of the altar, before being given to the public.” Pope Benedict XV kept the writings of Abbot Marmion close at hand and recommended them to the saintly head of the Ukrainian Catholic Church Metropolitan Andrei Sheptitsky of Lviv, saying: “Read this, it is the pure doctrine of the Church.”
Posted by Stephanie A. Mann at 1:00 AM