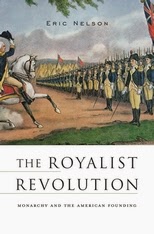 Generations of students have been taught that the American Revolution was a revolt against royal tyranny. In this revisionist account, Eric Nelson argues that a great many of our “founding fathers” saw themselves as rebels against the British Parliament, not the Crown. The Royalist Revolution interprets the patriot campaign of the 1770s as an insurrection in favor of royal power—driven by the conviction that the Lords and Commons had usurped the just prerogatives of the monarch.

Leading patriots believed that the colonies were the king’s own to govern, and they urged George III to defy Parliament and rule directly. These theorists were proposing to turn back the clock on the English constitution, rejecting the Whig settlement that had secured the supremacy of Parliament after the Glorious Revolution. Instead, they embraced the political theory of those who had waged the last great campaign against Parliament’s “usurpations”: the reviled Stuart monarchs of the seventeenth century.

When it came time to design the state and federal constitutions, the very same figures who had defended this expansive conception of royal authority—John Adams, Alexander Hamilton, James Wilson, and their allies—returned to the fray as champions of a single executive vested with sweeping prerogatives. As a result of their labors, the Constitution of 1787 would assign its new president far more power than any British monarch had wielded for almost a hundred years. On one side of the Atlantic, Nelson concludes, there would be kings without monarchy; on the other, monarchy without kings.

HUP posted an interview with the author in July this year and Jack N. Rakove reviews it, with some reservations, for The Weekly Standard:

Eric Nelson is a young historian of political thought at Harvard whose basic ambition is to transform every topic he studies. He has published three books in the past decade, and each seeks to transform a major subject in the study of early modern (16th-18th century) political ideas. His first book, The Greek Tradition in Republican Thought (2004), identifies a mode of thinking about the collective use of property that departs sharply from the emphasis on political liberty and personal independence that dominates the scholarly interpretation of early modern republicanism. Nelson built on this argument in his second book, The Hebrew Republic (2010), by noting how early modern thinkers used the biblical idea of the half-century Jubilee to support the redistribution of property. But that book’s greater contribution lies elsewhere. Nelson argues that the Jews’ desire to replace direct divine rule with monarchy, as expressed in 1 Samuel 8:4-9 and rabbinic commentaries, provides a basis for preferring representative government to arbitrary royalty. The use of these sources by early modern writers demonstrates that creative political thinking was profoundly informed by religious texts and concerns and was not merely a secular development.

In The Royalist Revolution, Nelson turns his attention from Europe to revolutionary America. His argument will alternately surprise, shock, distress, and outrage many scholars, but it will also help to reshape a debate about the origins of the presidency, a topic that gravely matters as we agonize over the role of the post-9/11 executive in our impassioned and impasse-ridden politics.

Nelson’s argument begins with an ingenious analysis of a surprising claim that American revolutionaries made just before independence. Resistance leaders and the Continental Congress repeatedly urged George III to take their side in the struggle against Parliament’s assertion that it possessed unlimited authority to enact laws governing the colonies “in all cases whatsoever.” In their view, the king should act as a wholly independent monarch who would treat each of his empire’s representative assemblies as possessing essentially the same authority. If Parliament overstepped its power in enacting laws for the colonists, the king should intervene, wielding his royal veto against unjust legislation. He should act, as Thomas Jefferson memorably wrote in 1774, as “the balance of a great, if a well poised empire.” Far from clinging unthinkingly to the Glorious Revolution settlement of 1688 and its aftermath, which made the British king a decidedly constitutional and limited monarch, George III should reclaim his prerogative and vigorously exercise the independent powers that custom and theory located in the executive. The clearest exponent of this view was James Wilson of Pennsylvania, who later played a critical role in shaping the novel presidency that emerged from the Constitutional Convention of 1787.

Other scholars, myself included, have never known quite what to make of these claims. Taken at face value, they imply an ignorance of British governance so profound as to make the colonists seem like political idiots. Perhaps the claims can be read as an ultimatum to Britain’s ruling class. The colonists really did not believe that the king would take this part. They simply wanted to demonstrate that they would no longer recognize any parliamentary jurisdiction over America, beyond allowing it to regulate imperial trade, a power that had to be lodged somewhere.

Nelson powerfully demonstrates that there was a depth to this position that other scholars have simply missed. In his view, some (though hardly all) American leaders had become “patriot royalists” who were strikingly sympathetic to the monarchist arguments that the “execrable” Stuart monarchs of the 17th century had made against Parliament. The key texts here pivot on a largely forgotten struggle in the 1620s, when Parliament tried to enact legislation regulating American fisheries, and James I and Charles I each wielded the royal prerogative to insist that the colonies were not subject to parliamentary governance. For patriot royalists arguing within the precedent-laden traditions of Anglo-American governance, the Stuart success on this point in the 1620s provided crucial evidence that the colonists could revive and deploy a century-and-a-half later.

Read the rest of the detailed review there.
Posted by Stephanie A. Mann at 12:30 AM

Email ThisBlogThis!Share to TwitterShare to FacebookShare to Pinterest
Labels: books, Jacobites, The American Revolution, The Jacobite Pretenders, The Weekly Standard