Even in Fiction, the Queen Dies 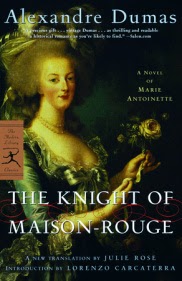 Paris, 1793, the onset of the Terror. Brave Republican Maurice rescues a mysterious and beautiful woman from an angry mob and is unknowingly drawn into a secret Royalist plot—a plot revolving around the imprisoned Queen of France, Marie Antoinette, and her enigmatic and fearless champion, the Knight of Maison-Rouge. Full of surprising twists, breakneck adventure, conspiracies, swordplay, romance, and heroism, The Knight of Maison-Rouge is an exhilarating tale of selflessness, love, and honor under the shadow of the guillotine. Dumas here is at the very height of his powers, and with this first and only modern translation, readers can once again ride with the Knight of Maison-Rouge.

On October 16, 1793, Marie Antoinette was beheaded by the guillotine at what is now Place de la Concorde in Paris. Elena Maria Vidal provides details of her death here.

Alexandre Dumas' The Knight of the Maison-Rouge (1845) tells the story of an attempt to save the queen by substituting an impostor in the Conciergerie. Dumas used the attempt of the Chevalier le Rougeville to communicate with Marie Antoinette with a message hidden in the petals of a carnation as a detail in the novel. Dumas does not contradict history by having the plot succeed, and the queen rides from the left bank to the right bank to die--with a most pathetic scene of her poor little dog Thisbe, following her cart.
Posted by Stephanie A. Mann at 12:30 AM