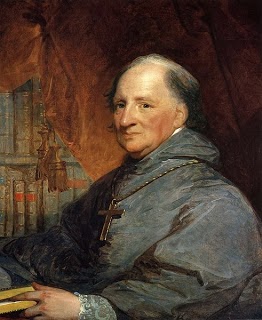 On November 6, 1789, Pope Pius VI appointed John Carroll as the first bishop in the new United States of America: in Baltimore, Maryland. According to the History Today website:

On this day in 1789, Pope Pius VI appoints John Carroll bishop of Baltimore, making him the first Catholic bishop in the United States.

Carroll was born in Upper Marlboro, Maryland, in 1735. His mother came from a wealthy family and had been educated in France. At age 13, Carroll sailed for France in order to complete his own education at St. Omer's College in French Flanders. At age 18, he joined the Society of Jesus, and after a further 14 years of study in Liege, he received ordination as a priest at age 34. Pope Clement XIV's decision in 1773 to dissolve the Jesuit order, however, ended Carroll's European career.

Three years after Carroll's return to Maryland, the need to make allies of French Catholics in Canada created an opportunity for him to join a Congressional delegation dispatched to negotiate with the Canadians. Benjamin Franklin served on the same delegation, and although the mission failed, Franklin proved an excellent ally to Carroll. In 1784, Franklin recommended to the papal nuncio in Paris that Carroll assume the position of Superior of Missions in the United States of North America, which removed American Catholics from the authority of the British Catholic hierarchy. In this role, as bishop and ultimately as the first archbishop in the United States (1808), Carroll oversaw the creation of leading Catholic institutions in the new nation, including the nation's first Catholic university (Georgetown University, founded in 1789) and cathedral (Baltimore Basilica, built in 1806).

More about John Carroll and the Carroll family here. The great connection between the Carroll family and the English Reformation is that the Carrolls of Maryland endured similar recusancy laws in colonial Maryland as the Catholics of England--in spite of the fact the Maryland had been founded by the Lords Baltimore as a colony in which both Catholics and Protestants were to be able to practice their religion without government interference--and thus John and his brother Daniel and his cousin Charles attended the College of St. Omers (what we would now call a high school in the USA) in the Spanish Netherlands. Father Robert Parsons, SJ founded St. Omers--now Stonyhurst in England--for the Catholic laymen of England because they could not attend Catholic school in England (or in the English colonies).
Posted by Stephanie A. Mann at 12:30 AM