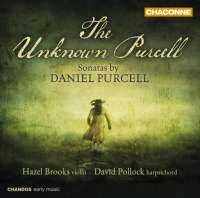 Daniel Purcell, who is either Henry Purcell's younger brother or a cousin, died on November 26, 1717. According to this site,

Daniel Purcell (c.1663-1717) was a musician, composer, socialite and punster. He was a child in the choir of the Chapel Royal, organist at Magdalen College, Oxford, and composer-in-residence at the Theatre Royal in Drury Lane. His output was prolific, consisting of music for some fifty plays, as well as many anthems, cantatas, songs, odes, and instrumental sonatas.

Whilst in Oxford, Daniel Purcell was also a member of an Oxford Music Club, which also counted Richard Goodson, the organist of Christ Church, and James Brydges, Duke of Chandos and later famously patron to Handel, amongst its membership.

Of Daniel's works, it is probably the theatre music which is most of interest, ranging from single songs for sometimes ill-fated productions to whole 'Purcellian' Dramatick Operas such as The Island Princess (Motteux, 1699), and The Grove, or Love's Paradise (Oldmixon, 1700). His cantatas 'after the Italian Manner' (1713) were some of the first examples of their style in the English language, and, whilst he held no official appointment, his composition of odes for Princess (later Queen) Anne, and various other members of the Royal family, show his close connections with court life.

The wikipedia article also cites Purcell's music for Choral Evensong as being the most performed of his music today. Here is a performance of his Magnificat, by a group called Novi Cantores. Presto Classical offers this CD from Priory which includes his Magnificat and Nunc Dimittis from Chicester Cathedral and also have this CD from Chandos (cover pictured above): The Unknown Purcell:

On this recording we have a selection of works for solo harpsichord and for violin and continuo by Daniel Purcell, most of which are premiere recordings. Traditionally, Daniel Purcell has been known primarily as the younger brother of Henry Purcell (though a strong argument can be made that they were cousins), and it has been said that it was from this family connection only that he derived ‘what little reputation which as a musician he possessed’ (Sir John Hawkins). It is not true, however, that Daniel’s legacy was based entirely on the fame of Henry. Daniel lived for over twenty years after Henry’s death in 1695, adopting styles and forms that only became popular in England around 1700, including the da capo aria, the Italianate cantata and – most relevant to this recording – the solo sonata.

Nearly all of Daniel Purcell’s surviving solo harpsichord music consists of arrangements, the only clear exception being the short Toccata, a brief essay in the style of the preludes from Henry Purcell’s harpsichord suites. The Suite is a simple but effective arrangement of movements from the composer’s own suite, for four-part strings, for Farquhar’s play The Inconstant. The expressive Rondeau is also likely an arrangement of a piece for four-part strings. The other three harpsichord pieces are simple arrangements of Daniel’s songs, derived from Oxford manuscripts, and reflecting Daniel’s links with the city.

Choral Evensong is part of the "Anglican Patrimony" the Ordinariate brings to the Catholic Church, and this blog has a post that demonstrates even how its celebration is an outreach to those Anglo-Catholics remaining in the Church of England (pray it is not too long before they join the "old true flock of Christ" as Blessed John Henry Newman proclaimed!).
Posted by Stephanie A. Mann at 12:30 AM