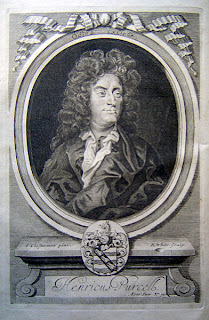 Henry Purcell died on November 21, 1695. The wikipedia article on this great English Baroque composer includes some excerpts from his compositions, while this "Online Gallery" from the British Library features portraits and excerpts. Like the sixteenth composers Tallis and Byrd, Purcell lived through dynastic changes that effected changes in his music style and career.

This biography from The Purcell Society describes some of those changes:

During the 1680s, Purcell was frequently called upon to compose a large-scale ode or ‘welcome song’ to mark a special event in the royal calendar. In 1682, he was appointed as a Gentleman of the Chapel Royal, and, in the following year, his first published collection appeared. This was the Sonnata's of III. Parts, for two violins, bass viol and continuo. His best-known composition, the dramatic entertainment Dido and Aeneas, was also written during the 1680s, though it is not certain when the first performance took place.

In 1689, William and Mary were crowned King and Queen, and there seem to have been fewer opportunities at court for composers than under their predecessors, Charles II and James II. Purcell turned to the theatre, writing four large-scale operatic works between 1690 and 1695, as well as incidental music for numerous plays. He continued to write court odes, however, including one each year between 1689 and 1694 to mark the birthday of Queen Mary. He also composed music for her state funeral, which took place in March 1695. Just a few months later, on 21 November 1695, Purcell himself died. 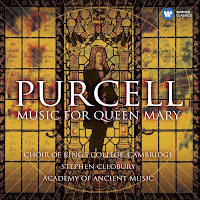 Since he wrote music both to celebrate her birthday and to commemorate her passing, this recording by the Choir of King's College Cambridge and the Academy of Ancient Music, conducted by Stephen Cleobury, looks like an interesting collection.

The poet wishes well to the divine genius of Purcell and praises him that, whereas other musicians have given utterance to the moods of man’s mind, he has, beyond that, uttered in notes the very make and species of man as created both in him and in all men generally.

HAVE, fair fallen, O fair, fair have fallen, so dear
To me, so arch-especial a spirit as heaves in Henry Purcell,
An age is now since passed, since parted; with the reversal
Of the outward sentence low lays him, listed to a heresy, here.

Not mood in him nor meaning, proud fire or sacred fear,
Or love or pity or all that sweet notes not his might nursle:
It is the forgèd feature finds me; it is the rehearsal
Of own, of abrupt self there so thrusts on, so throngs the ear.

Let him Oh! with his air of angels then lift me, lay me! only I’ll
Have an eye to the sakes of him, quaint moonmarks, to his pelted plumage under
Wings: so some great stormfowl, whenever he has walked his while

The thunder-purple seabeach plumèd purple-of-thunder,
If a wuthering of his palmy snow-pinions scatter a colossal smile
Off him, but meaning motion fans fresh our wits with wonder.
Posted by Stephanie A. Mann at 12:30 AM