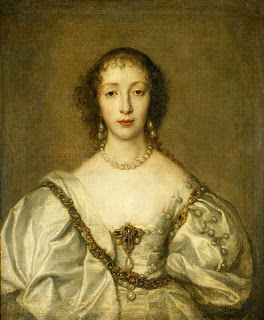 Henrietta Maria, Charles I's widow, died in France on September 9, 1669; she had been given a dose of opiates and did not revive. She was 60 years old and had been a widow for 20 years.

At first her arranged marriage to Charles I was as unhappy as one could be when the husband had a male favorite who opposed her possible influence on the young monarch. But once Buckingham was assassinated, Charles and Henrietta Maria grew to love each other. She was the sister of the most Catholic King of France, Louis XIII and had been sent to England with a mission to convert her Anglican husband. She was not crowned Queen of England because she could not receive Holy Communion in the Church of England.
As Charles became so uxurious, there were some who feared that he would become a Catholic just to please his wife and the mother of their growing brood. Conversions at Court and the very presence of Catholic priest and sacraments at Court were unsettling to the Puritans in Parliament. She was attractive and gathered Catholics and converts around her.
When the Civil War began, Charles and his queen set up court in Oxford. She used the chapel at Merton College for Mass. Eventually Henrietta Maria fled England, home to France after a stop in the Netherlands, because she was attainted a traitor by Parliament. She worked hard to raise funds for her husband's cause and was bitterly grieved by his capture and execution.
Upon the Restoration of the Monarchy in the person of her son Charles II she returned to England for a time but then came back home to France, always wearing mourning for her husband.
Perhaps she led the widowed life in exile denied Marie Antoinette. There are certainly other parallels between the two monarch couples--the strained relationship at first; the deepening love and interdependence; the loyalty and faithfulness; the queen's role in the king's difficulties in ruling the nation--the role of the executed monarch as a saintly figure--except that Louis XVI had been deposed and Charles I still held his title. The great difference between them is that Henrietta Maria escaped.
Posted by Stephanie A. Mann at 4:17 AM