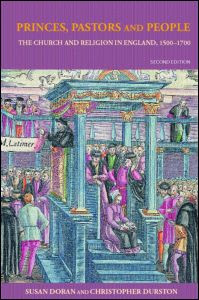 Subtitle: The Church and Religion in England, 1500-1700, Second Edition
London and New York: Routledge, 2003
By Susan Doran and Christopher Durston
From the book description:
Princes, Pastors and People traces the religious upheavals that occurred in England during the turbulent years of the sixteenth and seventeenth centuries. The book introduces recent research and guides readers through the major issues that have divided Reformation historians during the last forty years:
--The state of the late-medieval Catholic Church
--The causes of the English Reformation
--The success and popularity of the Elizabethan Protestant Church
--The impact of the Laudian innovations of Charles I's reign
--The Puritan attempt to bring about cultural revolution in the 1650s
--The nature of the Restoration Anglican Church and its relations with the dissenting community
Princes, Pastors and People uses a thematic approach to chart the long-term developments across the period in all the keys areas including theological and liturgical change, the role of the clergy and the importance of religion in the everyday lives of people.
This second edition brings the survey up to date to include historiographical developments since the appearance of the first edition [in 1991] and for the first time examines in detail the religious events of the period from 1500 to 1529.
In their preface to this edition the authors note that they completely re-wrote the book and updated it extensively based on the new scholarship of Duffy, MacCulloch, Peter Marshall, Christopher Haigh, and others. The introduction provides an excellent overview particularly reflecting the revisionist view of this era developed by Duffy and Haigh. There is a list of suggested reading at the end of each chapter; each chapter covers a theme chronologically; and the authors weigh the evidence and the different interpretations fairly and concisely. The themes covered/chapter titles are:
Theology and liturgy
Sacred spaces
The Church in England and churches abroad
Conformist belief and practices
Heresy and dissent
The clergy
The Church and social control
The book ends with "Conclusions" which contained the only quibble I had with the book. On page 200, the authors discuss some revisionists' "denial of the existence of all anti-clericalism on the eve of the Reformation", but never cite which revisionists and where this denial occurs. The authors then state that "Some of them, for example, wrote all Protestants out of their accounts", but again never cite which revisionists, in what books, articles, papers or presentations.
Otherwise, I would highly recommend this book which also includes a chronology and glossary.
Posted by Stephanie A. Mann at 3:21 AM