More Details from the Catholic Herald 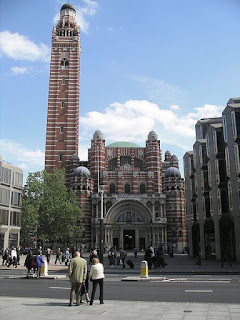 When Pope Benedict visits Scotland and England, he will get to hear Susan Boyle sing! Even before Mass, I don't think "I dreamed a dream" is an appropriate selection.

Even as the Cardinal Archbishop of Westminster rejoices in the opportunities offered by the Papal Visit, some Catholics reportedly want the Pope to tone it down:

"English Catholic officials are hoping that the Pope will not further inflame anti-Catholic sentiment by speaking out against gay marriage or adoption, or abortion or divorce."

Irish Travellers are on their way to Birmingham, setting up to see the Pope, while the Catholic Cardinal Archbishop of St. Andrews and Edinburgh doesn't seem to share the official view described above because he

"should particularly like the Holy Father to remind Catholics in Scotland of the basics of our Catholic faith and how we should be living it in these challenging times."

EWTN has posted a promo for their coverage of the Papal Visit--unfortunately, they picture Westminster Abbey instead of Westminster Cathedral when announcing the Pope's Mass in London!

Counting down the days!
Posted by Stephanie A. Mann at 3:23 AM