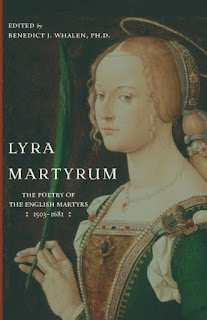 Today is the 425th anniversary of the martyrdom of St. Robert Southwell at Tyburn in London.

Like St. Valentine, St. Robert Southwell was a martyr: an English Jesuit who served as a clandestine missionary in post-Reformation England. There he ministered in secret for six years before he was arrested and imprisoned in the Tower of London. After three years of imprisonment and torture, he was convicted of high treason and executed by being hanged, drawn, and quartered.

During his time in England, Southwell witnessed the executions of many other Catholics, including those of people he knew personally. It’s in this light, and in light of his own eventual martyrdom, that his poetry carries with it an especial gravity. At once horrified and inspired by the martyrdoms he witnessed, Southwell wrote this paradox into his poetry, as reflected in the poems selected for this episode.

The three poems are "The Burning Babe", "A Child My Choice", and "I Die Alive". These three poems are included in a new anthology from Cluny Media, Lyra Martyrum: The Poetry of the English Martyrs, 1503-1681, edited by Benedict Whalen of Hillsdale College.

Saint Robert Southwell, pray for us!
Posted by Stephanie A. Mann at 12:30 AM