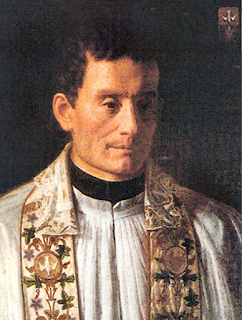 In my review of David W. Fagerberg's Liturgical Mysticism, I mentioned that in one chapter he highlighted the spirituality of Venerable Francis Libermann, who died on February 2, 1852. He was convert to Catholicism from Judaism and is known as the Second Founder of the Spiritan order:

Venerable Francis Libermann had a most remarkable journey of faith. He was born into an orthodox Jewish family in the Alsace region of France in 1802, and given the name Jacob.

Jacob Libermann’s father was a rabbi, and Jacob was preparing to become a rabbi himself when his studies led him to the New Testament and to Christianity.

He was baptized Francis Mary Paul, in 1826, at Christmas.

Soon he was studying for the Catholic priesthood, but violent attacks of epilepsy put his vocation on hold.
It was fifteen years before he was finally ordained, in 1841.

In 1848 Libermann brought personnel and a renewed Spiritual energy to the Spiritans that transformed the Congregation.

Those intervening years were a time of grace and of maturing, as Libermann became an advisor and confidant to many seminarians and others wanting to grow in the spiritual life. His own trials and painful experiences, as well as joys and perceived blessings, developed in him a great confidence in Providence and a sense of the Holy Spirit directing human affairs.

Professor Fagerberg quotes from the five volumes of spiritual letters the counsel he gave correspondents to embrace their cross and suffer with Jesus. Duquesne University has a selection of his letters online. He also offered other advice; for example to Louise des Loges, Libermann advised her in her discernment of a missionary vocation: