Preview: "The Tears of Christ" on the Son Rise Morning Show 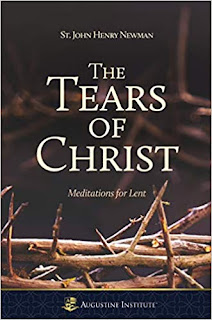 Tomorrow, February 27--the Thursday after Ash Wednesday--Anna Mitchell and I will preview our Lenten series on the Son Rise Morning Show. Each Monday morning during Lent, starting with the first Monday on Lent, March 2, and ending on the Monday of Holy Week, April 6, we'll discuss one of the sermons for the week from The Tears of Christ: Meditations for Lent, edited and complied by Christopher O. Blum of the Augustine Institute.

As Blum notes in his introduction to the volume, nearly all of the sermons are from Newman's years as an Anglican minister and most are from the eight volumes of the Parochial and Plain Sermons, preached between 1825 and 1843. The first six volumes are from his Parochial, parish sermons when he was the Vicar of the University Church of St. Mary the Virgin; the last two volumes are from the Plain sermons contributed by the members of the Oxford Movement to the Tracts of the Times. Therefore, these sermons are intrinsically connected to Newman's efforts to revive the Church of England in his day. They represent his liturgical and rhetorical efforts to renew belief in and devotion to Jesus Christ as the Savior of the world, to remind his congregation what they ought to believe and how they should live out those beliefs every day. 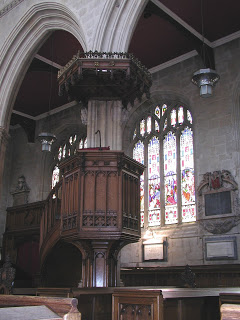 As W. J. Copeland, a Tractarian and Newman's curate at St. Mary and St. Nicholas in Littlemore wrote in his 1868 edition of the eight volumes of the Parochial and Plain Sermons:

They made, in their day, partly through their publication, but yet more, probably, through their living effect upon those who heard them, a deep and lasting impression for good on the Communion for whose especial benefit they were designed; they exercised an extensive influence very far beyond it; and their republication will awaken in many minds vivid and grateful recollections of their first appearance.

They met, at that time, very real and great moral, intellectual, and spiritual needs of man,—in giving depth and precision and largeness to his belief and apprehension of the mysteries of God, and seriousness and accuracy to his study and knowledge of himself, of his own nature, with its manifold powers, capacities, and responsibilities, and of his whole relation to the supernatural and unseen. They found a response in the hearts and minds and consciences of those to whom they were addressed, in marvellous proportion to the affectionate and stirring earnestness with which their Author appealed to the conscious or dormant sense of their needs, and his zealous and energetic endeavours, under God's blessing, to show, in every variety of light, how the grand central Verities of the Christian Dispensation, entrusted as the good "Deposit," to the Church, were revealed and adapted to supply them.

Many things, indeed, contained in these volumes have become, from the very readiness of their first acceptance, and from their gradual reception into the current of religious thought, so familiar, that it requires some retrospect of the time previous to their appearance to appreciate the original freshness with which they brought out the fundamental Articles of the Christian Faith, and their bearing on the formation of the Christian character; and to understand the degree in which they have acted, like leaven, on the mind and language and literature of the Church in this Country, and have marked an era in her History.

Copeland did not follow Newman into the Catholic Church, however devoted he was as curate and friend. (A curate is like an Associate Pastor or priest assisting the Pastor in Catholic parish. In the Diocese of Wichita, Kansas we call them Parochial Vicars.)

Newman dedicated another volume of Anglican sermons to Copeland, Sermons on Subjects of the Day of which Copeland wrote in his 1869 edition:

ON the republication of the present Volume of Sermons in answer to an extensive demand for it, it is well, on behalf both of the Author and of the Editor, to remind the reader of its special characteristic, as separate and distinguished from the volumes republished under the title of "PAROCHIAL AND PLAIN SERMONS." . . .

A volume, however, entitled "SERMONS ON SUBJECTS OF THE DAY," warns the reader by its very title that these Sermons are to be read and understood mainly with reference to their direct or indirect bearing on the occasion and circumstances of their first publication. They have necessarily an historical and controversial aspect, though most of them treat of matters of deep and unfailing interest, and of vast practical importance. 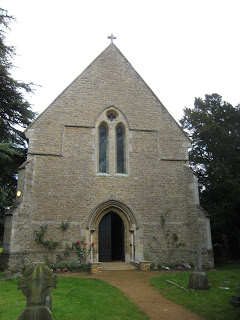 This volume ends poignantly with Newman's last sermon as an Anglican, "The Parting of Friends", preached in Littlemore on September 25, 1843, which concludes with Newman's farewell to his congregation at St. Mary and St. Nicholas:

And, O my brethren, O kind and affectionate hearts, O loving friends, should you know any one whose lot it has been, by writing or by word of mouth, in some degree to help you thus to act; if he has ever told you what you knew about yourselves, or what you did not know; has read to you your wants or feelings, and comforted you by the very reading; has made you feel that there was a higher life than this daily one, and a brighter world than that you see; or encouraged you, or sobered you, or opened a way to the inquiring, or soothed the perplexed; if what he has said or done has ever made you take interest in him, and feel well inclined towards him; remember such a one in time to come, though you hear him not, and pray for him, that in all things he may know God's will, and at all times he may be ready to fulfil it.

You might be surprised to find out that it was an Anglican who republished these Parochial and Plain Sermons and Sermons on Subjects of the Day. Father Ian Ker notes in his great biography of Newman that the Jesuit theologian Father Giovanni Perrone had told Newman that he did not need to revise the sermons at all, as long as he (Newman) did not publish them under his own name! (p. 629) and that "Just over a third of the pastoral sermons he wrote as an Anglican were eventually published" (p. 90). Copeland added the caveat to these editions that the author of the sermons might not agree with everything he had written and said as an Anglican. Also note that these collections of Anglican sermons were published after Newman had written the Apologia pro Vita Sua and The Dream of Gerontius: he was at a high point in his life as a Catholic: more accepted by other Catholics and more understood by High Church, Tractarian Anglicans.

As a Catholic priest, Newman changed his method of composing and delivering sermons. In his introduction to The Tears of Christ, Blum notes that Newman's sermons as an Anglican would last forty to sixty minutes; eventually, Newman would preach his Catholic sermons from notes. But there are some written Catholic sermons in this volume, from his Discourses to Mixed Congregations preached in Birmingham after he'd established the Oratory there, which he dedicated to Bishop Nicholas Wiseman in 1849 and from Faith and Prejudice, a collection of nine Catholic sermons previously unpublished, with an introduction by Charles Stephen Dessain of the Birmingham Oratory in 1956.

St. John Henry Newman's sermons are the most accessible of all his works, although they are indeed longer and more developed than the homilies we Catholics hear today, because they teach their readers about the what Copeland called "the fundamental articles of the Christian faith". As Father Louis Bouyer of the Oratory said of the Ignatius Press one-volume edition of the Parochial and Plain Sermons:

These sermons are . . . the most lasting expression of Newman's own gradual discovery of all the fullness of the appeal and the challenge addressed to all men by Catholic truth and Catholic life, inseparable as they are within genuine Christianity. There, above all, he himself will be found, with his intellectual power, his poetical vision, as well as his moral and spiritual integrity. Nothing can constitute for us, still today, and maybe today more than ever, such a powerful introduction to what Christianity may give to and expect from our surrender to its call in the midst of a world no longer pretending to be Christian.

In the Lenten season of conversion, they are perfect material for reading and meditation.
Posted by Stephanie A. Mann at 12:00 AM