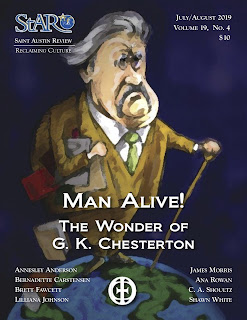 The July/August issue of the St Austin Review is all about Chesterton! It will be perfect reading for those attending the American Chesterton Society Annual Conference the first weekend in August.

My contribution to this issue is not Chestertonian. It's a book review of Southwell's Sphere: The Influence of England's Secret Poet by Gary M. Bouchard. An excerpt:

After studying on the Continent, joining the Society of Jesus in Rome, and being ordained a priest, Englishman Robert Southwell came home secretly to offer Mass and give the other Sacraments to the underground Catholics of England. He also sought to encourage her poets to a better form of art, to turn from “the follies and fayninges of love” and instead “see how well verse and vertue sute together”as he admonished “His Loving Cousin” in the foreword to editions of “St. Peter’s Complaint”.

In Southwell’s Sphere: The Influence of England’s Secret Poet Gary M. Bouchard traces the impact of that foreword and Southwell’s poems on contemporary and later English poets, noting that while Southwell had influence and even some fame—in spite or because of his execution for treason—in the Elizabethan era, his reputation has dwindled to the inclusion of “The Burning Babe” in anthologies. Responding to recent work of Anne R. Sweeney (Robert Southwell: Snow in Arcadia: Redrawing the English Lyric Landscape, 1586-95), Alison Shell (Catholicism, Controversy and the English Literary Imagination, 1558-1660), Gary Kuchar (The Poetry of Religious Sorrow in Early Modern England) and others, Bouchard wants to make his own contribution to exploring Southwell’s underappreciated influence on English literature.

As Bouchard summarizes, Southwell’s call to reform English poetry “instructed William Alabaster, provoked Edmund Spenser, prompted George Herbert, haunted John Donne, inspired Richard Crashaw and consoled Gerard [Manley] Hopkins.” He explores each author’s response to not only Southwell’s martyred Catholicism but his call to change the way they were writing poetry. Except for Spenser, these poets were clergymen. Alabaster converted to Catholicism and relapsed; Donne was raised a Catholic and apostatized; Crashaw and Hopkins were Catholic converts who remained faithful. Herbert and Spenser were Protestants. . . .

I'm looking forward to receiving my complimentary copy.
Posted by Stephanie A. Mann at 1:00 AM