The Walsingham Conspiracy and its Martyrs 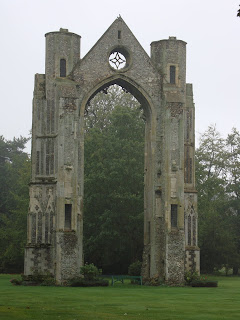 Yesterday I posted some information about the Walsingham Conspiracy in 1537, when Cromwell's men came to suppress the priory of Walsingham, a house of Augustinian Canons and to close down the shrine (from British History Online: 'Houses of Austin canons: The priory of Walsingham', in A History of the County of Norfolk: Volume 2, ed. William Page (London, 1906), pp. 394-401.)

I searched for more information about these men and their conspiracy, which was to somehow stop the suppression of the priory and the destruction of the shrine. The leader of the group, Ralph Rogerson, planned an uprising, timed for St. Eligius' Eve on June 24. Recruiting others to join the uprising led to the kind of talk that authorities were always listening for, including from those who knew about the conspiracy and didn't report it (misprision of treason).

Different accounts (from Gasquet and Elton) provide slightly different details of the lists of men and what happened to them, but it is sure that the authorities wanted to squash this conspiracy and even the thought of conspiracy in Norfork by executing clergy and laity on site: they were not taken to London for trial, but held and tried in Norwich. They weren't all executed in Norwich, but also taken to three other locations, east, west, and north of Norwich to be hanged, drawn, and quartered: Yarmouth (Great Yarmouth, on the North Sea), Lynn (Bishop's Lynn under the authority of the Bishop of Norwich until 1537 when Henry VIII took control, King's Lynn), and outside the priory in Walsingham.

Neither the clergy, Mileham and Pecock, nor the laymen, Rogerson, the Gysburghs, etc, are listed among the English martyrs as developed for a cause of canonization in the late nineteenth century, but in Walsingham, Mileham and Gysburgh are considered martyrs. There is a shrine in their honor set up in cellar of the Dowry House.

There was one notable survivor from the gutting and bloodletting at Walsingham, the prior, Richard Vowell, as the Catholic Encyclopedia recounts:

In 1537 while the last prior, Richard Vowell, was paying obsequious respect to Cromwell, the sub-prior Nicholas Milcham was charged with conspiring to rebel against the suppression of the lesser monasteries, and on flimsy evidence was convicted of high treason and hanged outside the priory walls. In July, 1538, Prior Vowell assented to the destruction of Walsingham Priory and assisted the king's commissioners in the removal of the figure of Our Lady, of many of the gold and silver ornaments and in the general spoliation of the shrine. For his ready compliance the prior received a pension of 100 pounds a year, a large sum in those days, while fifteen of the canons received pensions varying from 4 pounds to 6 pounds. The shrine dismantled, and the priory destroyed, its site was sold by order of Henry VIII to one Thomas Sidney for 90 pounds, and a private mansion was subsequently erected on the spot.

Image credit: By John Armagh - Own work, CC BY-SA 3.0 ("13th-Century east-end of Walsingham Priory dominating the site")
Posted by Stephanie A. Mann at 12:30 AM

Email ThisBlogThis!Share to TwitterShare to FacebookShare to Pinterest
Labels: Augustinian Canons, Dowry House, Our Lady of Walsingham, The Dissolution of the Monasteries, the Walsingham Conspiracy, the Walsingham Martyrs