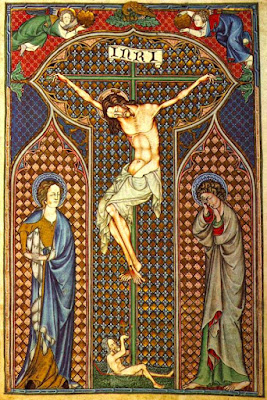 From Stile Antico: William Cornysh's setting of "Woefully Arrayed":
Woefully arrayed
My blood, man for thee ran, it may not be nayed;
My body, blo and wan;
Woefully arrayed.

Behold me, I pray thee
with all thy whole reason
and be not hard-hearted,
and for this encheason,
sith I for thy soul sake
was slain in good season,
Beguiled and betrayed
by Judas’ false treason,
unkindly entreated,
with sharp cord sore freted,
the Jews me threated,
they mowed, they grinned,
they scorned me,
condem’d to death as thou may’st see;
Woefully arrayed.

Thus naked am I nailed.
O man, for thy sake;
I love thee, then love me,
why sleepst thou, awake,
remember my tender heartroot for thee brake;
with pains my veins constrained to crake;
thus tugged to and fro,
thus wrapped all in woe,
whereas never man was so entreated,
thus in most cruel wise
was like a lamb offer’d in sacrifice;
Woefully arrayed.

Of sharp thom I have worn
a crown on my head.
So pained, so strained, so rueful, so red,
thus bobbed, thus robbed,
thus for thy love dead;
unfeigned, not deigned,
my blood for to shed,
my feet and handes sore
the sturdy nailes bore;
what might I suffer more,
than I have done, O man, for thee?
Come when thou list, welcome to me!
Woefully arrayed.

A Clerk of Oxford posted about Woefully Arrayed several years ago.

There is another side to Good Friday, however, as this is also the day of Jesus's Triumph over sin and death: the Royal Banners go forth and the Cross is our Sole Hope:

The complete version of the Vexilla Regis, set by Francisco Guerrero, the sixteenth century Spanish composer who travelled to the Holy Land. Andrew Carwood of the Cardinall's Musick described Guerroro's adventures and misfortunes in the liner notes for one of their CDs:

In 1581 he travelled to Rome and remained there for a little over a year dealing with two large collections of music which were published in 1582 and 1584, but his most extraordinary journey was to the Holy Land in 1588. The fact that he undertook this journey at all shows considerable courage and presumably a certain amount of religious devotion (Guerrero was briefly in training for the priesthood whilst a teenager in Seville). No other composer is known to have undertaken such a journey. The party travelled first to Italy and then set off from Venice on 14 August 1588. They visited Zakinthos, Jaffa, Jerusalem, Bethlehem and Damascus and returned to Venice on 9 January 1589. Guerrero remained in Venice to supervise the publication of two further collections and then sailed to Marseilles via Genoa and he was subjected to the terrifying ordeal of being attacked by pirates, not once but twice. His money was stolen and a ransom exacted. This misfortune together with the cost of funding his publications meant that, when Guerrero eventually reached Seville in the summer of 1589, he was dangerously short of funds. During Advent 1590, at the age of 62, he was forced to take back responsibility for the choristers (presumably to increase his income) but, in an interesting parallel with the beginning of his career, Guerrero found himself unable to cope with the demands of the position. On 21 August 1591 he was confined to a debtor’s prison until the Cathedral authorities at Seville took pity and paid the outstanding debt, securing the composer’s release on 2 September. By 1599 his fortunes had obviously improved (perhaps as a result of the successful publication of his travelogue in 1592) as he planned a second trip to the Holy Land which was approved by the Seville Chapter on 11 January. For some reason Guerrero delayed his departure and this proved a fatal mistake as Seville was struck by plague in the summer and Guerrero was not strong enough to withstand it.
Posted by Stephanie A. Mann at 12:30 AM