I was doing a little research on Eleanor of Aquitaine's annulment of her marriage King Louis VII of France, which was granted in 1152. Soon after being freed from that marriage and getting her lands back, Eleanor married Henry, the Duke of Normandy, soon to be crowned the King of England in 1154. Although she had borne only daughters for Louis, Eleanor gave Henry several sons: William, Henry, Richard, Geoffrey, and John. One note about Eleanor and Louis VII's daughters: they were not declared illegitimate, since their parents had married in good faith in spite of their degree of consanguinity. Also note that Henry and Eleanor were even more closely related than Louis and Eleanor!

As viewers of The Lion in Winter know, Eleanor and Henry endured some marital problems--she helped her sons in rebellions against Henry and he had her imprisoned. He let her out for Christmas and other holidays, but as Robert Bolt's play imagines, those were not happy reunions! 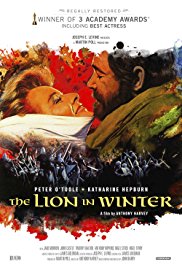 Reading further about her life after Henry died and Richard freed her, I noticed that Eleanor had governed England during Richard's absences and survived in fact into King John's reign. She had helped raise the ransom demanded by Henry IV, the Holy Roman Emperor (who had been excommunicated by Pope Celestine III for imprisoning a Crusader). She was the regent in England while Richard was imprisoned.

That brought to mind those two great Hollywood movies about England while Richard is held by the Emperor, Ivanhoe and The Adventures of Robin Hood. Where's Eleanor in those movies? In both of them, John is trying to usurp Richard's throne. The historical John did try to offer Henry IV some money, along with King Philip II of France, to keep Richard prisoner until Michaelmas (September 29) in 1194, but Henry refused that offer. Richard I was finally released on February 4, 1194.

So once again, for the sake of a good story, Hollywood misleads us. Eleanor was in charge, not Prince John or Sir Guy of Gisbourne, in England. I'll let you know soon why I was researching Eleanor of Aquitaine and her annulment from King Louis VII.
Posted by Stephanie A. Mann at 12:30 AM