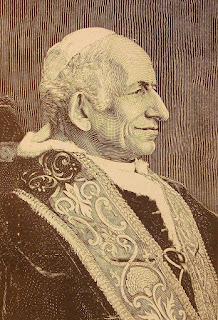 Pope Leo XIII--one of my favorite popes--was elected to the  Chair of St. Peter on February 20, 1878. One of his first acts was to restore the Catholic hierarchy of Scotland on March 15, 1878, just as Pope Pius IX had restored the Catholic hierarchy of England in 1850. As in England, so in Scotland, Vicars Apostolic had been appointed after James Beaton, Cardinal Archbishop of Glasgow, died on April 24, 1603. The first new Archbishop of Glasgow was Charles Eyre; in St. Andrews and Edinburgh, John Strain became Archbishop; the sees of Aberdeen (Bishop John MacDonald), Argyll and The Isles (Bishop Angus MacDonald), Dunkeld (Bishop George Rigg), and Galloway (Bishop John McLachlen) were also established.

Twenty years later, Pope Leo reflected on this restoration in the encyclical Caritatis studium issued on July 25, 1898 (one of 85 he wrote during his 25 year papacy!):

To Our Venerable Brethren, the Archbishops, and Bishops of Scotland.

The ardent charity which renders Us solicitous of Our separated brethren, in nowise permits Us to cease Our efforts to bring back to the embrace of the Good Shepherd those whom manifold error causes to stand aloof from the one Fold of Christ. Day after day We deplore more deeply the unhappy lot of those who are deprived of the fullness of the Christian Faith. Wherefore moved by the sense of the responsibility which Our most sacred office entails, and by the spirit and grace of the most loving Saviour of men, Whom We unworthily represent, We are constantly imploring them to agree at last to restore together with Us the communion of the one and the same faith. A momentous work, and of all human works the most difficult to be accomplished; one which God's almighty power alone can effect. But for this very reason We do not lose heart, nor are We deterred from Our purpose by the magnitude of the difficulties which cannot be overcome by human power alone. "We preach Christ crucified . . . and the weakness of God is stronger than men" (1 Cor. i. 23-25). In the midst of so many errors and of so many evils with which We are afflicted or threatened, We continue to point out whence salvation should be sought,exhorting and admonishing all nations to lift up "their eyes to the mountains whence help shall come" (Ps. cxx.). For indeed that which Isaias spoke in prophecy has been fulfilled, and the Church of God stands forth so conspicuously by its Divine origin and authority that it can be distinguished by all beholders: "And in the last days the mountain of the house of the Lord shall be prepared on the top of mountains and shall be exalted above the hills" (Is. ii. 2).

2. Scotland, so dear to the Holy See, and in a special manner to Us, has its place in Our care and solicitude. We love to recall the fact that over twenty years ago the first act of Our Apostolic Ministry was performed in favour of Scotland, for on the second day of our Pontificate We gave back to the Scottish people their Ecclesiastical Hierarchy. From that day forward, with your efficient co-operation, Venerable Brethren, and that of your clergy, We have constantly sought to promote the welfare of your nation, which is naturally inclined to embrace the truth. And now that We are so far advanced in years that the end cannot be delayed much longer, We have thought it meet to address you,Venerable Brethren, and thus give your nation a further proof of Our Apostolic affection.

3. The terrible storm which swept over the Church in the sixteenth century,deprived the vast majority of the Scottish people, as well as many other peoples of Europe, of that Catholic Faith which they had gloriously held for over one thousand years. It is most pleasing to Us to revert to the great achievements of your forefathers on behalf of Catholicism, and also to allude to some of those,and they are many, to whose virtue and illustrious deeds Scotland owes so much of her renown. Surely your fellow-countrymen will not take it ill that We should again remind them of what they owe to the Catholic Church and to the Apostolic See. We speak of what you already know. As your ancient Annals relate, St. Ninian, a countryman of yours, was so inflamed with the desire of greater spiritual progress by the reading of Holy Writ, that he exclaimed: "I shall rise and go over sea and land, seeking that truth which my soul loveth. But is so much trouble needful? Was it not said to Peter: `Thou are Peter and upon this rock I will build my Church, and the gates of hell shall not prevail against it?' Therefore in the faith of Peter there is nothing wanting, nothing obscure,nothing imperfect, nothing against which evil doctrines and pernicious views can prevail, after the manner of the gates of hell. And where is the faith of Peter,but in the See of Peter? Thither, thither I must repair, that going forth from my country, from my kindred, and from my father's house, I may see in the land of the Vision the will of the Lord and be protected by His Temple." (Ex Hist. Vitae S. Niniani a S. Aelredo Ab. cons.) Hence, full of reverence he hastened to Rome, and when at the Tomb of the Apostles he had imbibed in abundance Catholic truth at its very source and fountainhead, by command of the Supreme Pontiff he returned home, preached the true Roman faith to his fellow-countrymen, and founded the Church of Galloway about two hundred years before St. Augustine landed in England. This was the faith of St. Columba; this was the faith kept so religiously and preached so zealously by the monks of old,whose chief centre, Iona, was rendered famous by their eminent virtues. Need We mention Queen Margaret, a light and ornament not only of Scotland, but of the whole of Christendom, who, though she occupied the most exalted position in point of worldly dignity,sought only in her whole life things eternal and divine, and thus spread throughout the Church 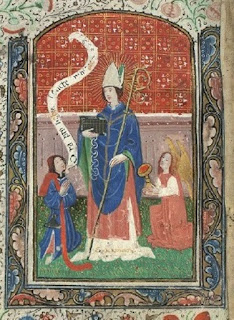 the luster of her virtues? There can be no doubt she owed this her eminent sanctity to the influence and guidance of the Catholic Faith. And did not the power and constancy of the Catholic faith give to Wallace and Bruce, the two great heroes of your race, their indomitable courage in defence of their country? We say nothing of the immense number of those who achieved so much for the commonwealth, and who belong to that progeny which the Catholic Church has never ceased to bring forth. We say nothing of the advantages which your nation has derived from her influence. It is undeniable that it was through her wisdom and authority that those famous seats of learning were opened at St. Andrews, Glasgow, and Aberdeen, and that your judicial system was drawn up and adopted. Hence We can well understand why Scotland has been honoured by the title of "Special Daughter of the Holy See."