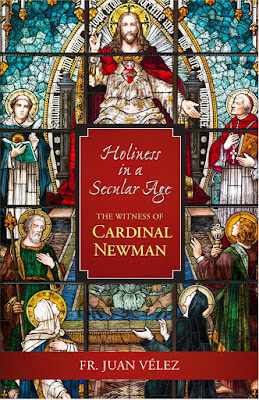 When young John Henry Newman experienced his first conversion to an evangelical form of Anglicanism, he was inspired by two maxims of Thomas Scott. One of them — “holiness rather than peace” — became a motto for the rest of his life.

In this introduction to Blessed John Henry Newman’s example of pursuing holiness in 19th-century England as it was becoming more secularized, Father Juan Vélez guides readers through Newman’s life, projects and published works. He presents Newman as a man of faith evangelizing a world that was moving away from Christian doctrine and morality.

After a succinct survey of Newman’s life, including his leadership in the “Oxford Movement,” his conversion to Catholicism, his foundations of the Oratory of St. Philip Neri in England and the short-lived Catholic University of Ireland, and his struggles and eventual acceptance within the Catholic Church in England, the author addresses a number of themes in Newman’s life.

Please read the rest there. I just love the cover of the book, which is a detail of the stained glass window behind the altar of the chapel for the Newman Center on the campus of the University of Nebraska-Lincoln.

Note that Father Velez has produced a study guide, which he is sharing for free on his website, www.cardinaljohnhenrynewman.com/

O God, who bestowed on the Priest Blessed John Henry Newman the grace to follow your kindly light and find peace in your Church; graciously grant that, through his intercession and example, we may be led out of shadows and images into the fulness of your truth. Through our Lord Jesus Christ, your Son, who lives and reigns with you in the unity of the Holy Spirit, one God, for ever and ever. Amen.
Posted by Stephanie A. Mann at 12:30 AM