For the Inklings Festival 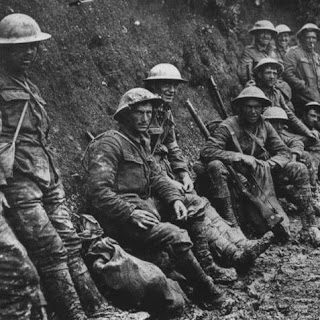 The Inklings Festival is less than a week away. On Friday, October 20, Joseph Pearce will talk about two of the poets of WWI, Siegfried Sassoon and Wilfred Owen, and of course, J.R.R. Tolkien and C.S. Lewis. Here is the schedule for the lectures on Friday and Saturday:

World on Fire: How the Inklings Responded with Hope & Creativity by Joseph Pearce
"Tolkien & Lewis among the War Poets" - Friday, 7 PM

Beyond the Waste Land: Hope and War in the Work of Lewis - Saturday, 9:30 AM

The rest of the details are here.

I wrote a little essay for the Eighth Day Institute blog on some of the music of WWI, including the young Classical music composers who served in the trenches:

POPULAR music during World War I served to rouse the troops, comfort the grieving, and encourage patriotic spirit. Several classical composers served in the British armed forces during the war and their works reflected their experience, as did the works of C. S. Lewis, J. R. R. Tolkien, and poets like Wilfred Owen and Siegfried Sassoon, subjects of this year’s Inklings Lecture Series.

Popular songs wistfully recalled home or reminded home to remember the soldiers who were away. Lewis and Tolkien must have heard these songs at home and at the front. One of the most popular songs, composed in 1914, was “Keep the Home Fires Burning” by Ivor Novello, sung here by the great Irish tenor, John McCormack, who recorded many of these songs, toured the USA during the war for the Red Cross, and also sang opera around the world . . .

George Butterworth died in action at the First Battle of Somme on August 5, 1916. Upon his death, his father found out that his son had been awarded medals for bravery, and his military commander found out that he was a promising composer. Butterworth was interested in the English folk song and traditional dancing, especially Morris dancing. He composed “A Shropshire Lad Rhapsody”, based on the poetry of A. E. Housman, and “The Banks of Green Willow.”

Frederick Septimus Kelly and William Dennis Browne were closely associated with the poet Rupert Brooke. Browne wrote the famous description of Brooke’s death and midnight burial on the Isle of Skyros among the olive groves. He died on June 15, 1915 during the Battle of Gallipoli.

Please read the rest on the Eighth Day Institute website.
Posted by Stephanie A. Mann at 12:30 AM