The Fortnight for Freedom: St. John the Baptist 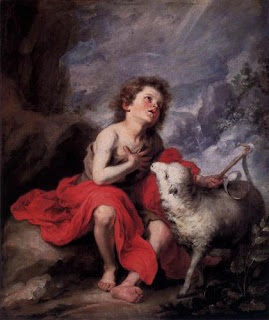 Today is the Solemnity of the Nativity of St. John the Baptist.

Only two other birthdays are celebrated on the Church Calendar: The Nativity of the Blessed Virgin Mary and the The Nativity of Our Lord Jesus Christ. Otherwise, saints and blesseds are remembered on the dates of the deaths (or perhaps the "translation" of their remains or some other important date--not usually their birth date). The saint's day of earthly death is the beginning of their eternal life in Heaven. This site offers the reason for honoring St. John the Baptist on his birthday--because he was cleansed from Original Sin, baptized as it were, when Mary visited her cousin Elizabeth and he leapt in his mother's womb when the unborn Jesus in Mary's womb came near him. St. Augustine pointed to this understanding of St. John the Baptist's holy birth.

Devotion to St. John the Baptist is ancient in the Church and his Nativity was celebrated with a vigil and with bonfires on the feast. This site points out a pilgrimage site in Norfolk before the English Reformation demonstrating devotion to the saint as a martyr, as it had a replica of the head of St. John the Baptist. The image was destroyed at some point during the Reformation, of course.

Another mark of devotion to St. John the Baptist in England was the presence of the Knights Hospitaller of St. John in England, suppressed by Henry VIII. He had Sir Thomas Dingley and Sir Adrian Fortescue executed under Attainder in July of 1539 and seized the order's property in England:

The Order’s lands throughout Western Europe were managed by communities of its members called Commanderies, which were gathered into provinces called Grand Priories. In Britain the estates were administered from a Commandery at Clerkenwell, London, from about 1140. This became a Priory in 1185, with responsibility for other Commanderies that had been set up in Scotland and Wales as well as throughout England. Ireland became a separate Priory.

In the 1140s the Priory in Clerkenwell was set up as the English headquarters of the Order. When King Henry VIII split from the Catholic Church and established a new Anglican Church, the Order in England was dissolved and all its lands and wealth were seized by the Crown. The Order was briefly restored by Henry’s Catholic daughter, Queen Mary, who granted it a Royal Charter. However, on the accession of her Protestant sister, Queen Elizabeth I, the Order in England was dissolved for good.


One may, today, however visit the Museum of the Order of St. John in London today.

In an ultimate example of the State dictating to the Church its worship and practice, the provisions of Elizabeth I's Act of Uniformity of 1559 all took effect on this feast:

Be it therefore enacted by the authority of this present Parliament, that the said statute of repeal, and everything therein contained, only concerning the said book, and the service, administration of sacraments, rites, and ceremonies contained or appointed in or by the said book, shall be void and of none effect, from and after the feast of the Nativity of St. John Baptist next coming; and that the said book, with the order of service, and of the administration of sacraments, rites, and ceremonies, with the alterations and additions therein added and appointed by this statute, shall stand and be, from and after the said feast of the Nativity of St. John Baptist, in full force and effect, according to the tenor and effect of this statute; anything in the aforesaid statute of repeal to the contrary notwithstanding.

And further be it enacted by the queen's highness, with the assent of the Lords (sic) and Commons in this present Parliament assembled, and by authority of the same, that all and singular ministers in any cathedral or parish church, or other place within this realm of England, Wales, and the marches of the same, or other the queen's dominions, shall from and after the feast of the Nativity of St. John Baptist next coming be bounden to say and use the Matins, Evensong, celebration of the Lord's Supper and administration of each of the sacraments, and all their common and open prayer, in such order and form as is mentioned in the said book, so authorized by Parliament in the said fifth and sixth years of the reign of King Edward VI, with one alteration or addition of certain lessons to be used on every Sunday in the year, and the form of the Litany altered and corrected, and two sentences only added in the delivery of the sacrament to the communicants, and none other or otherwise.

The Act of Uniformity also set out the penalties for those who refused to use The Book of Common Prayer and for those who refused to attend Church of England services. It made the celebration of the Catholic Mass, which Elizabeth I's father Henry VIII had attended up to three times a day, illegal. This is an obvious overreach--in our terms today--by the secular state over the Church in matters of worship and doctrine, and a clear violation of the freedoms of the Church guaranteed by the Magna Carta. Only one bishop, an elderly prelate, accepted the Elizabethan Acts of religious settlement--that's quite a turnaround from all the bishops save one (St. John Fisher) accepting Henry's Supremacy, etc.

The illustration is Murillo's painting of St. John the Baptist as a child.
Posted by Stephanie A. Mann at 12:30 AM

Email ThisBlogThis!Share to TwitterShare to FacebookShare to Pinterest
Labels: Act of Supremacy, Act of Uniformity, Elizabeth I, religious settlement, The Fortnight for Freedom, The Nativity of St. John the Baptist