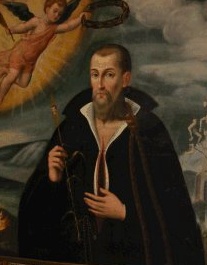 St. Thomas Garnet, SJ was an alumnus of the seminary in Valladolid, Spain:

ST. Thomas GARNET SJ son of Richard Garnet, Confessor of the Faith, and nephew of Father Henry Garnet SJ martyr, was born in London in 1574.

Garnet's father Richard Garnet was at Balliol College at Oxford when restrictions were being placed on any students who seemed to be leaning toward Catholicism. That generation of the Garnet family produced at least four religious vocations: Henry Garnet became a Jesuit and three girls, Margaret, Eleanor, and Anne braved exile to become nuns of the Augustinian convent in Louvain.

For some time he was page to the Count of Arundel, until, in the year 1594, at the age of sixteen, he entered the college at St. Omer in the Low Countries.

Two years after, he was ordered to the college of St. Alban at VALLADOLID, where he studied for four years. In the same city he was ordained a priest, and from there returned to England.

In 1604 he was admitted to the Society of Jesus by his uncle (the local superior of the Jesuits), but upon attempting to leave England to begin his novitiate at Louvain [in 1605], he was stopped and incarcerated in the Gatehouse jail at Westminster, and later in the Tower of London. He was banished in the year 1606.

[Note that authorities wanted him to give information about his uncle's involvement in the Gunpowder Plot.]

Shortly afterwards, he returned surreptitiously to England, where he was betrayed for being a priest. He was interrogated before the Protestant bishop of London on the 17th of November 1607, but refused to answer his questions, neither was he disposed to make the new oath of loyalty, because its contents were against the Catholic Faith. Having been intensively interrogated already for the bishop by Sir Thomas Wade, the superintendent of the keep and a very cruel torturer of priests, Father Garnet was moved to the Old Bailey prison.


Shortly afterwards, he was processed and condemned for his priesthood. While in jail, some Catholics provided him with means of escaping, but he refused, choosing rather to obey an interior voice that said to him "noli fugere".

He was stripped, hung, drawn and quartered at Tyburn (London) on the 23rd of June 1608.On the 25th of October 1970, he was solemnly canonised by Pope Paul VI.

On the scaffold he announced that he was the happiest man alive that day. His steadfastness in facing death impressed the crowds, so he was dead before quartering and beheading. St. Thomas Garnet's missionary career during James I's reign shows the relative leniency of that king.

Because James wanted to preserve peace with Spain and France, Catholic countries he did not consistently target priests--and certainly not laity--for execution throughout his reign. Of course not every priest arrested during the reign of Elizabeth I was executed since some were held in Wisbech prison. Even after the terror of the Gunpowder Plot, Father Thomas Garnet, since nothing connected him then with any of the plotters, was (after torture) released into exile.
Posted by Stephanie A. Mann at 12:30 AM