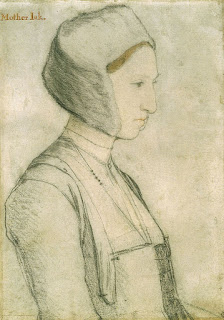 On June 10, 1537, Blessed Thomas Green, choir monk, and Blessed Walter Pierson, laybrother, both of the London Charterhouse, died from starvation in Newgate Prison.

As we are in the midst of the anniversaries of the deaths of the Carthusians, chained and pinioned in the Newgate prison and thus dying of dehydration and starvation because they would not swear the Oaths of Succession and Supremacy, we should remember Margaret Giggs Clement. She was St. Thomas More's ward and one of the most learned women in England, educated and fostered in his household. Her specialty was algebra!

As much as More valued her intellectual attainments, I presume he might have admired even more highly her great, dangerous, audacious, and humble acts of charity in May and June 1537, as the Carthusians suffered in prison. This website describes her loving charity:

But Henry was bothered. He feared more rebellion from his intransigently Catholic people. Although he had not yet allowed the country to drift too far into heresy, the sensus catholicus of the people was outraged by his actions. He could not inflame such rage by another display of martyrdom. And so the Carthusians remained in Newgate. They remained, unfed and unattended. They were left to rot, and rot they did. Their names? John Davy, Thomas Green, Thomas Johnston and Richard Bere (choir monks) and William Greenwood, Robert Salt, Walter Peerson, Thomas Scryven, Thomas Reding, and Willam Horne (conversi, or brothers). Bound hand and foot, iron collars about their throats, they were chained to posts in a single cell and abandoned. Margaret Clement, the adopted daughter of St Thomas More, for a while managed to gain entrance to the cell (largely on account of the fact that her husband was physician to the King — and due to her disguise, as a milk-maid), and there fed them what food and water she could, and cleaned them for their own filth. This was discovered and she then attempted to find a way in from above, breaking through the roof of their cell and lowering food to their mouths. Eventually, too, this was not possible.

And so the good fathers and brothers died together in that dark and fetid place, one by one in prayerful silence, abandoned by Man but not by God. Greenwood, then Davy, then Salt; Peerson and Green upon the same day, mid-June; Scryven and Reding some days later. Somehow, Richard Bere (the nephew of a former Abbot of Glastonbury) survived until August 9th. Astonishingly, Thomas Johnson was still alive by September 20th, some sixteen weeks after his incarceration. He was removed to the Tower of London where he languished for a further two-and-a-half years before being martyred at Tyburn in the company of St Thomas More's son-in-law, Giles Heron, on 4th August 1540. These are all accounted Blessed by the Church. May they all pray for us who are unworthy of them.

Margaret Giggs Clement died in exile 35 years to the day of St. Thomas More's martyrdom. On her deathbed she reported seeing those blessed martyrs of the Charterhouse at her bedside, according to this website:

But the time had now come that God had appointed to reward her for her good works done to the Fathers of the Charterhouse. He visited her with an ague which held her nine or ten days, and having brought her very low and in danger, she received all the sacraments with great devotion, and being desirous to give her blessing to all her children who were all present except her Religious daughters and one more that remained at Bruges with her husband, she caused her to be sent for in all haste. Wednesday being now come, which was the last day before she died, and asking if her daughter were come, and being told no, but that they looked for her every hour, she made answer that she would stay no longer for her, and calling her husband she told him that the time of her departing was now come, and she might stay no longer, for there were standing about her bed the Reverend Fathers, Monks of Charterhouse, whom she had relieved in prison in England and did call upon her to come away with them, and that therefore she could stay no longer, because they did expect her, which seemed strange talk unto him. Doubting that she might speak idly by reason of her sickness, he called unto her ghostly Father, a Reverend Father of the Franciscans living in Mechlin, to examine and talk with her, to whom she constantly made answer that she was in no way beside herself, but declared that she still had the sight of the Charterhouse monks before her, standing about her bedside and inviting her to come away with them, as she had told her husband. At the which they were all astonished.
Posted by Stephanie A. Mann at 12:30 AM