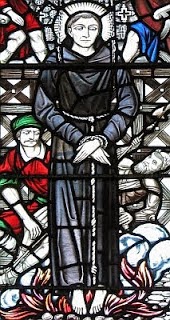 Blessed John Forest is unique among the Catholic martyrs of the English Reformation. He is what I would call a Supremacy Martyr, suffering for his refusal to recognize Henry VIII's supremacy over the Church of England, but he was found guilty, not of treason but of heresy--and thus burned alive in chains by the order of Thomas Cranmer, the Archbishop of Canterbury.

As one of the Observant Franciscans and as one of Queen Katherine of Aragon's chaplains and confessors, Blessed John Forest (beatified by Pope Leo XIII), was always opposed to what Henry VIII planned to do to resolve his "Great Matter", manipulating the Catholic Faith in England and attempting to do so in Rome to achieve his goal of marrying Anne Boleyn. The Thomas Abel mentioned below was another one of Katherine of Aragon's chaplains, executed along with two others (and three Zwinglians) two years later. Father Peto's sermon at Greenwich compared Henry VIII to Ahab and Anne Boleyn to Jezebel and occasioned threats from Thomas Cromwell that Peto and his defender Friar Elstow mocked as ineffective to those who did not fear death. Blessed John Forest endured imprisonment and a torturous death to defend the sanctity of marriage and unity of the one, holy, catholic and apostolic Church.

From the Catholic Encyclopedia, details about the blessed martyr's life and death:

Born in 1471, presumably at Oxford, where his surname was then not unknown; suffered 22 May, 1538. At the age of twenty he received the habit of St. Francis at Greenwich, in the church of the Friars Minor of the Regular Observance, called for brevity's sake "Observants". Nine years later we find him at Oxford, studying theology. He is commonly styled "Doctor" though, beyond the steps which he took to qualify as bachelor of divinity, no positive proof of his further progress has been found. Afterwards he became one of Queen Catherine's chaplains, and was appointed her confessor. In 1525 he appears to have been provincial, which seems certain from the fact that he threatened with excommunication the brethren who opposed Cardinal Wolsey's legatine powers. Already in 1531 the Observants had incurred the king's displeasure by their determined opposition to the divorce; and no wonder that Father Forest was soon singled out as an object of wrath. In November, 1532, we find the holy man discoursing at Paul's Cross on the decay of the realm and pulling down of churches. At the beginning of February, 1533 an attempt at reconciliation was made between him and Henry: but a couple of months later he left the neighbourhood of London, where he was no longer safe. He was probably already in Newgate prison 1534, when Father Peto [gave] his famous sermon before the king at Greenwich. In his confinement Father Forest corresponded with the queen and Blessed Thomas Abel and wrote a book or treatise against Henry, which began with the text: "Neither doth any man take the honour to himself, but he that is called by God as Aaron was.

On 8 April, 1538, the holy friar was taken to Lambeth, where, before Cranmer, he was required to make an act of abjuration. This, however, he firmly refused to do; and it was then decided that the sentence of death should be carried out. On 22 May following he was taken to Smithfield to be burned. The statue of "Darvell Gatheren" which had been brought from the church of Llanderfel in Wales, was thrown on the pile of firewood; and thus, according to popular belief, was fulfilled an old prophecy, that this holy image would set a forest on fire. The holy man's martyrdom lasted two hours, at the end of which the executioners threw him, together with the gibbet on which he hung, into the fire. Father Forest, together with fifty-three other English martyrs, was declared Blessed by Pope Leo XIII, on 9 December, 1886, and his feast is kept by the Friars Minor on 22 May.

The Guild of Blessed Titus Brandsma blog posted this information about the friar's correspondence with Katherine of Aragon:

“Most Serene Lady and Queen, my daughter most dear in the bowels of Christ, - When I read your letter I was filled with incredible joy, because I saw how great is your constancy in the Faith.

In this, if you persevere, without doubt you will attain salvation.

Doubt not of me that by any inconstancy I should disgrace my grey hairs.

Meanwhile I earnestly beg your steadfast prayers to God, for whose spouse we suffer torments, to receive me into His glory.

For it have I striven these four and forty years in the Order of St Francis.

Meanwhile do you keep free from the pestilent doctrine of the heretics, so that even if an angel should come down from Heaven and bring you another doctrine from that which I have taught you, give no credit to his words, but reject him; for that other doctrine does not come from God.

These few words you must take in lieu of consolation; but that you will receive from our Lord Jesus Christ, to whom I specially commend you, to my father Francis, to St Catherine; and when you hear of my execution, I heartily beg of you to pray for me to her.

I send you my rosary as I have but three days to live.”

Blessed John Forest, pray for us!
Posted by Stephanie A. Mann at 12:30 AM