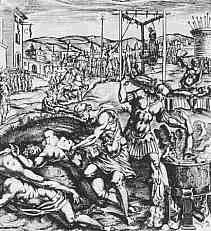 As the Catholic Encyclopedia recounts, Blessed Edward Jones was one of Richard Topcliffe's victims, enduring the torture meted out by Elizabeth I's personal pursuivant:

Blessed Edward Jones: Priest and martyr, b. in the Diocese of St. Asaph, Wales, date unknown; d. in London, 6 May 1590. Bred an Anglican, he was received into the Church at the English College, Reims, 1587; he was ordained priest in 1588, and went to England in the same year. In 1590 he was arrested by a priest-catcher, who pretended to be a Catholic, in a shop in Fleet Street. He was imprisoned in the Tower and brutally tortured by Topcliffe, finally admitting he was a priest and had been an Anglican. These admissions were used against him at his trial, but he made a skillful and learned defense, pleading that a confession elicited under torture was not legally sufficient to ensure a conviction. The court complimented him on his courageous bearing, but of course he was convicted of high treason as a priest coming into England. On the same day he was hanged, drawn, and quartered, opposite the grocer's shop where he had been captured, in Fleet Street near the Conduit.

Blessed Anthony Middleton: On the same day there suffered Anthony Middleton, priest and martyr, born probably at Middleton-Tyas, Yorkshire, date unknown, son of Ambrose Middleton of Barnard Castle, Durham, and Cecil, daughter of Anthony Crackenthorpe of Howgill Castle, Westmoreland. He entered the English College at Reims 9 Jan., 1582; was ordained 30 May 1586, and went to England in the same year. His work lay in London and the neighbourhood and he laboured very successfully; he was captured at a house in Clerkenwell (London) by the same artifice which was practiced on Father Jones. On the ladder he said: "I call God to witness I die merely for the Catholic Faith, and for being a priest of the true Religion"; and someone present called out, "Sir, you have spoken very well". The martyr was cut down and disemboweled while yet alive.

The observer's outcry was certainly a dangerous act--the usual procedure would be that the executioner would hold the decapitated head up and proclaim: "The head of a traitor" and the crowd would proclaim: "God Save the Queen!" Most irregular. Also irregular was Topcliffe's torture of Blessed Father Jones: Elizabeth I's government knew this procedure was not only irregular but illegal.--"It was during the time of the Tudors that the use of torture reached its height," wrote historian L.A. Parry in his 1933 book The History of Torture in England. "Under Henry VIII it was frequently employed; it was only used in a small number of cases in the reigns of Edward VI and of Mary. It was whilst Elizabeth sat on the throne that it was made use of more than in any other period of history."

The Golden Age of Elizabeth, indeed.
Posted by Stephanie A. Mann at 1:00 AM