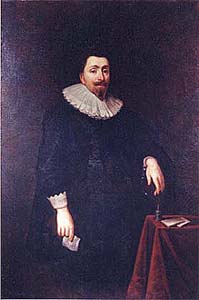 The National Catholic Register has this story about the rebuilding of a Catholic chapel in historic St. Mary's City, Maryland:


When and where did religious freedom begin in what is now the United States?
The answer is 1634, and the place is St. Mary’s City, Maryland.
Founded by Catholic proprietor Cecil Calvert, Lord Baltimore, Maryland offered — from the start — liberty of conscience and the free exercise of religion to all. The colony offered a new concept: no established religion funded by the government.
One of the most powerful symbols of this policy was expressed in the construction of the first major Catholic church in English America during the 1660s. Preceded by two earlier wooden chapels built by Jesuit Father Andrew White, who is often called the "Apostle of Maryland," the brick chapel was the first brick structure in the colony. At the time, no freestanding Catholic church could be built anywhere else in the English-speaking world. The Catholic, Quaker and Presbyterian faiths, and many others, took root and flourished in early Maryland. However, following a rebellion in 1689 against Lord Baltimore and the imposition of the royal government, Maryland’s revolutionary policy of religious freedom ended.
Read the rest here. Here's more information about St. Mary's City and its exhibits--please note that the rebuilt chapel is, as Dr. Miller's article in the National Catholic Register notes, an exhibit (not a site of worship):
The chapel is a museum exhibit of Historic St. Mary’s City, but it is also a place for visitors to learn about and contemplate this deep history and pray in a sacred and peaceful setting surrounded by the mortal remains of hundreds of Catholics who first planted the seeds of faith and religious liberty on these shores.
The chapel at St. Mary’s is a powerful symbol of the religious freedom and respect for conscience that Lord Baltimore and other Catholics introduced to these shores for the first time in 1634. It is a key place to explore the beginning of these fundamental human rights and the Church in America.
Posted by Stephanie A. Mann at 1:00 AM