A Supremacy Martyr Burned Alive as a Heretic! 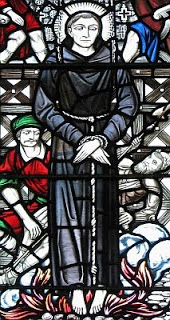 A heretic, that is, against the new orthodoxy that Henry VIII was the Supreme Head and Governor of the Church of England! Blessed John Forest is the only Supremacy Martyr to be executed by being burned alive, sentenced by Archbishop Thomas Cranmer, with the penalty of death carried out by the state.

Blessed John Forest was executed by being burned to death by being suspended over the flames from a gibbet --those are chains under his arms in the stained glass--on May 22, 1538 because he opposed Henry VIII's marriage to Anne Boleyn, the annulment of Henry's marriage to Catherine of Aragon, and Henry's claim to supremacy and religious and ecclesiastical matters in England, which was heresy to Henry VIII. According to the 1913 Catholic Encyclopedia:

Born in 1471, presumably at Oxford, where his surname was then not unknown; suffered 22 May, 1538. At the age of twenty he received the habit of St. Francis at Greenwich, in the church of the Friars Minor of the Regular Observance, called for brevity's sake "Observants". Nine years later we find him at Oxford, studying theology. He is commonly styled "Doctor" though, beyond the steps which he took to qualify as bachelor of divinity, no positive proof of his further progress has been found. Afterwards he became one of Queen Catherine's chaplains, and was appointed her confessor. In 1525 he appears to have been provincial, which seems certain from the fact that he threatened with excommunication the brethren who opposed Cardinal Wolsey's legatine powers. Already in 1531 the Observants had incurred the king's displeasure by their determined opposition to the divorce; and no wonder that Father Forest was soon singled out as an object of wrath In November, 1532, we find the holy man discoursing at Paul's Cross on the decay of the realm and pulling down of churches. At the beginning of February, 1533 an attempt at reconciliation was made between him and Henry: but a couple of months later he left the neighborhood of London, where he was no longer safe. He was probably already in Newgate prison 1534, when Father Peto his famous sermon before the king at Greenwich. In his confinement Father Forest corresponded with the queen and Blessed Thomas Abel and wrote a book or treatise against Henry, which began with the text: "Neither doth any man take the honour to himself, but he that is called by God as Aaron was." On 8 April, 1538, the holy friar was taken to Lambeth, where, before Cranmer, he was required to make an act of abjuration. This, however, he firmly refused to do; and it was then decided that the sentence of death should be carried out. On 22 May following he was taken to Smithfield to be burned. The statue of Saint Derfel which had been brought from the church of Llanderfel in Wales, was thrown on the pile of firewood; and thus, according to popular belief, was fulfilled an old prophecy, that this holy image would set a forest on fire. The holy man's martyrdom lasted two hours, at the end of which the executioners threw him, together with the gibbet on which he hung, into the fire.

The Observant Franciscan Friars of Greenwich were among those who most adamantly defended the marriage of Catherine of Aragon and Henry VIII and protested against Henry's "coup d'eglise". Here is a sermon telling the story not only of John Forest but of the Greenwich Franciscans and here is another survey of these events.
Posted by Stephanie A. Mann at 12:30 AM