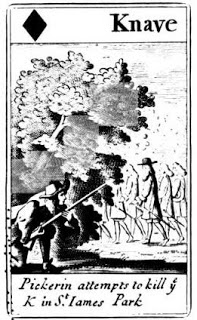 Blessed Thomas Pickering was a Benedictine lay brother and martyr caught up in Titus Oates' duplicitous plot; a member of an old Westmoreland family, b. c. 1621; executed at Tyburn, 9 May, 1679. He was sent to the Benedictine monastery of St. Gregory at Douai, where he took vows as a lay brother in 1660. In 1665 he was sent to London, where, as steward or procurator to the little community of Benedictines who served Queen Catherine of Braganza's chapel royal, he became known personally to the queen and Charles II; and when in 1675, urged by the parliament, Charles issued a proclamation ordering the Benedictines to leave England within a fixed time, Pickering was allowed to remain, probably on the ground that he was not a priest.

In 1678 came the pretended revelations of Titus Oates, and Pickering was accused of conspiring to murder the king. No evidence except Oates's word was produced and Pickering's innocence was so obvious that the queen publicly announced her belief in him, but the jury found him guilty, and with two others he was condemned to be hanged, drawn, and quartered. The king was divided between the wish to save the innocent men and fear of the popular clamour, which loudly demanded the death of Oates's victims, and twice within a month the three prisoners were ordered for execution and then reprieved. At length Charles remitted the execution of the other two, hoping that this would satisfy the people and save Pickering from his fate. The contrary took place, however, and 26 April, 1679, the House of Commons petitioned for Pickering's execution. Charles yielded and the long-deferred sentence was carried out on the ninth of May. A small piece of cloth stained with his blood is preserved among the relics at Downside Abbey.

The British Museum has a page dedicated to the deck of the Popish/Oates Plot playing cards, one of which depicted Brother Thomas Pickering's fictitious attempt on Charles II's life--and so does the V&A, providing this background:

Object Type
These playing cards are engravings. The images were made by cutting lines into the surface of a flat piece of metal, inking the plate and then transferring the ink held in the lines onto a sheet of paper. Francis Barlow's original drawings for the engravings are in the British Museum, London.

Subject
The Popish Plot was a fictitious Catholic conspiracy to kill Charles II that the Reverend Titus Oates claimed to have uncovered in 1678.The pictures on these cards tell the story of the plot and show the dire penalties meted out to alleged Roman Catholic enemies of the state. Sets of playing cards depicting historical events were very popular in the last quarter of the 17th century. There are other political packs from the time of the Popish Plot depicting 'All the Popish Plots' and the Rye House Plot, a conspiracy to assassinate Charles II and his brother, James, Duke of York.

Historical Context
There was great fear in Britain at the time of Catholic intrigue and a very real apprehension that on the death of Charles his Roman Catholic brother, James, would be placed on the throne. Prints were used to fuel public anxiety, and playing cards were another ideal means of spreading political propaganda at a low cost. Many packs were designed and engraved by leading artists of the day.
Posted by Stephanie A. Mann at 1:00 AM