Per this article in The Guardian, J.R.R. Tolkien's imagination expressed itself not merely in words but in images:

The film series of JRR Tolkien's The Hobbit is unlikely to come anywhere near matching the author's own visualisation of his imaginary world. We know what director Peter Jackson thinks the landscape of Middle Earth is like, from his previous films of The Lord of the Rings, as well as pre-released images from the first instalment of The Hobbit. Jackson's use of location to make the fantastic seem real is impressive. Yet his images are ponderous compared to the ethereal drawings and paintings in which Tolkien pictured places such as Rivendell and the Shire. 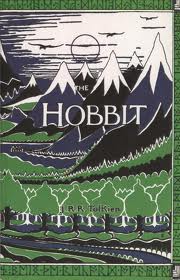 Tolkien imagined his otherworld of hobbits, elves and wizards in pictures, as well as words. The Hobbit was first published in 1937. As he wrote it, in the 30s, he made beguiling pictures and designs that map and depict the landscapes through which Bilbo Baggins was to journey.

Tolkien designed the cover for that first edition of The Hobbit. It immediately promises a rich and strange world within: layers of trees in green, white and purple fold over one another towards stylised mountain peaks and the great disc of the sun. Runes are inscribed along the edges of the design. Runic writing is the script of the elves in Middle Earth – but Tolkien did not invent it. Runes were used by the Vikings to inscribe memorials and spells. The Viking connection is telling, for Tolkien's art has a Scandinavian quality. The dreamlike elegance of The Hobbit's original cover is reminiscent of modern northern European art as well as ancient Viking designs.

Email ThisBlogThis!Share to TwitterShare to FacebookShare to Pinterest
Labels: art, books, J.R.R. Tolkien, The Hobbit, The Lord of the Rings