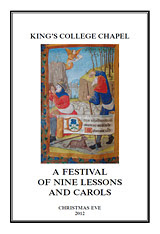 This year's new, commissioned hymn for the Lessons and Carols at King's College Chapel, Cambridge is set to words of Alfred, Lord Tennyson:

Ring out the grief that saps the mind,
For those that here we see no more,
Ring out the feud of rich and poor,
Ring in redress to all mankind.

Ring out a slowly dying cause,
And ancient forms of party strife;
Ring in the nobler modes of life,
With sweeter manners, purer laws.

Ring out the want, the care, the sin,
The faithless coldness of the times;
Ring out, ring out thy mournful rhymes,
But ring the fuller minstrel in.

Ring out false pride in place and blood,
The civic slander and the spite;
Ring in the love of truth and right,
Ring in the common love of good.

Ring in the valiant man and free,
The larger heart the kindlier hand;
Ring out the darkness of the land,
Ring in the Christ that is to be.

Carl Vine is the composer:

This year's commissioned carol in A Festival of Nine Lessons and Carols is a new setting of 'Ring Out, Wild Bells' by Alfred, Lord Tennyson (1809-92).

The poem appeared in what some would argue was Tennyson's finest collection, In Memoriam (1850), and has been set to music by Australian composer Carl Vine.

Carl studied physics and composition at the University of Western Australia and began his career writing music for theatre and dance in Sydney. Since then he has emerged as a major orchestral composer. He has written seven symphonies and nine concertos, as well as music for piano and string quartet.

He has also taken on more high profile projects, such as arranging the Australian national anthem and writing the 'Sydney 2000' presentation for the closing ceremony of the Atlanta Olympic Games (1996).

More about this year's Festival of Nine Lessons and Carols here, including this year's service booklet, with all of the notes about the BBC broadcast requirements along with the liturgical rubrics. The site also has information about when to hear the broadcast on the BBC and on various U.S. networks.
Posted by Stephanie A. Mann at 12:32 AM