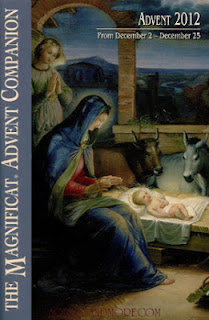 Every year, the Magnificat monthly prayer book publisher produces an Advent Companion book (it also presents a Lenten booklet) with daily meditations and other devotions for the season leading up to Christmas, including the great O Antiphons. This year's edition includes an essay on "Christmas in England" by James Monti, author of The King's Good Servant But God's First: The Life and Writings of St. Thomas More and of a book set for release next March, A Sense of the Sacred: Roman Catholic Worship In The Middle Ages.

Of course, Mr. Monti mentions English Carols, festivites during the Christmas Season, the Puritan attack on Christmas, and other highlights. Perhaps because his essay is focused on Christmas, he does not include consideration of the Ember Days during the Advent season. 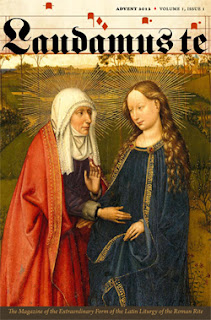 For that, you would need the new publication, Laudamus Te--except that the Advent issue may be sold out! Still available as an ebook perhaps and here's a sample which shows an article on the Ember Days in the Table of Contents. Note that the Christmas issue is at the printer and will ship December 16: 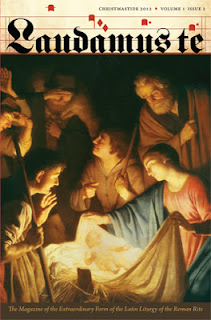 What is Laudamus Te? It is The Magazine of the Extraordinary Form of the Latin Liturgy of the Roman Rite:

It is the mission of Laudamus Te to bear witness to the sublime beauty of the ancient Latin liturgy, to foster renewed devotion to its merits, and to aid the faithful in entering more deeply into its sacramental mysteries.

Since the sacred liturgy is at the center of Catholic life, it seems fitting to have a devotional magazine focused on deepening our mystical participation in this sacramental experience. Laudamus Te follows the liturgical seasons of the 1962 calendar, providing daily Mass readings for the Extraordinary Form of the Roman Catholic Mass as well as explanatory essays, commentaries by various saints and the Church Fathers, and devotional writings by priests, religious, and laity. Our aim is to draw Catholics into a better understanding of the Mass as a whole and to bring about fruitful meditation and deeper devotion, as well as to educate and inform those who are new to the Extraordinary Form.

My husband and I attend Sunday Mass in the Extraordinary Form regularly and we both have 1962 missals, but I'm thinking of subscribing to Laudamus Te (I have purchased single copies of the Advent and Christmas issues already).
Posted by Stephanie A. Mann at 12:30 AM