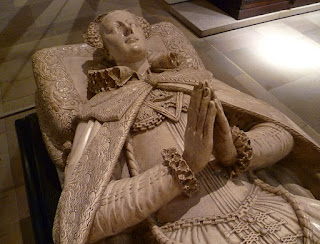 In this episode, I'll discuss two major crises in the reign of Elizabeth I and their impact on Catholics in England: First: Mary, Queen of Scots' presence on the island and as Elizabeth's prisoner and Second: the Spanish Armada.

The English response to the failure of the Spanish Armada is fascinating and horrifying, as a series of executions in London and southeast England demonstrated how dangerous Catholic priests and laity were to the country--while Catholic nobles had offered their help to defeat the Armada. The sad story of Mary, Queen Scots meant that some Catholics did form conspiracies to dethrone Elizabeth and replace her with Mary--but Elizabeth's own spymaster, Sir Francis Walsingham encouraged the plots so much that it's not always clear how much entrapment led the conspirators on.

As fascinating as these historical events are, I really want to dedicate as much time as possible to the martyrs who died during this last half of Elizabeth's long reign: St. Margaret Ward. St. Robert Southwell, St. Philip Howard, St. Henry Walpole, and St. Anne Line.

Then I'll make the transition from Elizabeth I to James VI of Scotland as her heir, with some final remarks on the Tudor dynasty and a review of the status of Catholics in 1603, as James (Mary, Queen of Scots' son) headed south to London to be crowned King James I of England and start a new dynasty: the Stuarts.

I welcome all listeners of Radio Maria US to my blog, whether you're listening on one of their radio stations or on line or through one of their apps. I invite you to call in with questions and comments toll-free at 866-333-MARY(6279). Just a reminder, too, that podcasts of previous episodes of The English Reformation Today are available on the Radio Maria US website.
Posted by Stephanie A. Mann at 12:13 AM