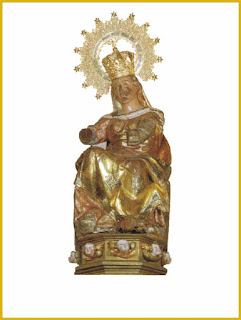 Franciscan Thomas Palaser and two laymen, John Norton and John Talbot who had assisted him were executed on September 8, 1600, near the end of Elizabeth I's reign/life. According to the Royal English College of Valladolid, Spain:

BLESSED Thomas PALASER OSF was probably born in Ellerton-upon-Sway, near Richmond in the County of Yorkshire. He was seminarian at Rheims (France) and in VALLADOLID, where he was ordained a priest the year 1596. He was arrested shortly after returning to England, but escaped. He exercised his Mission in the north of the Country. Condemned for being a priest, he was stripped, hung, drawn and quartered in Durham, on the 8th of September 1600 (the same day as the Image of the Virgin "The Vulnerata" was solemnly received into the Chapel, before the wife of the King Philip III, Margarita Lady of Austria). More about "The Vulnerata" here.

His two lay companions, Blessed John Norton and Blessed John Talbot, were also beatified that day, just as they shared the day of execution. Father Palaser was arrested in the home of John Norton, whose wife Margaret was also arrested. Norton, Mrs. Norton and Talbot were all found guilty of the felony of assisting a traitor, a Catholic priest. Mrs. Norton was not executed because she was pregnant at the time.

The College Prayer to Our Lady:
May our Lady Vulnerata and all our Martyr Saints intercede for us with the Lord, that our students and benefactors, past and present, may be helped and saved by him. Amen.
Posted by Stephanie A. Mann at 12:10 AM