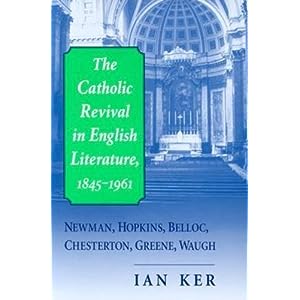 The Catholic Revival in English Literature, 1845–1961 presents a thorough discussion of the six principal writers of the Catholic revival in English literature—Newman, Hopkins, Belloc, Chesterton, Greene, and Waugh. Beginning with Newman’s conversion in 1845 and ending with Waugh’s completion of the triology The Sword of Honor in 1961, this book explores how Catholicism shaped the work of these six prominent writers.

John Henry Newman claimed in The Idea of a University that post-Reformation English literature was overwhelmingly Protestant and that there was no prospect of a Catholic body of literature. Describing this claim as “happily lacking in prescience,” Ian Ker persuasively argues that Newman, Hopkins, Belloc, Chesterton, Greene, and Waugh succeeded in producing a substantial body of literature written by Catholics who wrote as Catholics. These revivalists were not so much influenced by traditional themes of guilt, sin, and ceremony, as they were attracted to unexpected facets of Catholicism. The idea of a Catholic priest as a craftsman is a recurring motif, as is the celebration of the ordinariness and objectivity of Catholicism.

Ker’s compelling and intelligent reading of these six major writers will appeal to anyone with an interest in nineteenth- and twentieth-century English literature, or the relation between literature and theology.


Now I have, but have not yet commenced to read, Adam Schwartz's The Third Spring: G.K. Chesterton, Graham Greene, Christopher Dawson, and David Jones from Catholic University of America Press:
For most of modern history, Roman Catholics in Britain were a "rejected minority," facing hostility and estrangement from a culture increasingly at odds with traditional Christianity. Yet British Catholicism underwent a remarkable intellectual and literary renewal, especially in the twentieth century, drawing a disproportionate number of the age's leading minds into its ranks. The Third Spring unravels this paradox of a renascent Catholic culture within a post-Christian society. It does so through detailed profiles of the spiritual journeys and religious and cultural beliefs of four seminal members of that twentieth-century revival: G. K. Chesterton, Graham Greene, Christopher Dawson, and David Jones.

Although these four authors came from different backgrounds and wrote primarily in different genres, each converted to Roman Catholicism as an adult and made his new faith the foundation of his intellectual and artistic work. All of them judged the Church to be the last corporate voice of orthodox Christianity in a hitherto unmatched irreligious climate of opinion; and they concluded that the Roman Catholic vision of human nature, thought, history, and art was truer and richer than proposed by prevailing secularism. They thus built on the nineteenth-century "Second Spring" of British Catholicism proclaimed by John Henry Newman to create a fresh assertion of Roman Catholicism, one suited to an era of unprecedented unbelief: a Third Spring.

This book is the first detailed examination of these four authors as part of a Roman Catholic, counter-modern community of discourse. It is informed by extensive research in the writers' works, scholarship on them, and their personal papers. This study is also distinguished by its careful attention to the authors' cultural and religious contexts, and to the psychology and theology of conversion. It will therefore deepen understanding, and correct some misconceptions, of each man's spiritual development and his thought, while revealing the twentieth-century Catholic literary revival to be a distinct movement in both British and Roman Catholic thought.

Although The Pen and the Cross provides some insight into British Catholic imaginative writing and its historical context, its sympathies for favored literary critical models and for modernist and progressive theology preclude it from presenting a comprehensive portrait of the Catholic renascence or from appreciating what made it distinctive. . . .

As accurate as Griffiths’s descriptions of the nature and history of British Catholic intellectual life are, his analysis of them is marred by his interpretive frameworks. Griffiths shows a marked preference for writers whose work reveals “acceptance of modern trends in literature,” regarding them as a “refreshing departure.” His treatments of novels therefore privilege realistic fiction, which twentieth-century critics typically considered the foremost arena of forward-looking artistry. But this emphasis presents a grave problem for a synthetic investigation of Catholic literature. Although Griffiths claims correctly that realistic fiction has been the “dominant strain” in British Catholic narrative prose, he admits and discusses the substantial Catholic presence in other such genres, including historical fiction, detective stories, and fantasy. Yet his examination excludes utterly the finest Catholic fabulist, J. R. R. Tolkien.
Posted by Stephanie A. Mann at 12:17 AM