Our Lady of Walsingham in the News 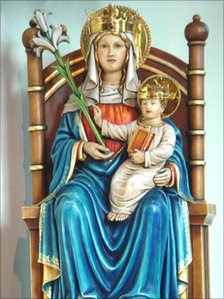 As John Whitehead comments on his blog, the title Our Lady of Walsingham is going to come up often this year, because of both the Ordinariate and the 950th anniversary of the shrine. On the same day St. Margaret Clitherow was honored in York, Our Lady was honored at Westminster Cathedral and Mr. Whitehead reports here on attending the Mass. The BBC also reported on the event and this blog provides more details. The Mass launches six months of celebrations leading up to the Feast of Our Lady on Walsingham on September 24 this year. Also, the three former Anglican sisters from Walsingham, Sister Carolyne Joseph, Sister Wendy Renate and Sister Jane Louise, are making rosaries to help support their newly formed Catholic religious community.
Posted by Stephanie A. Mann at 2:06 AM