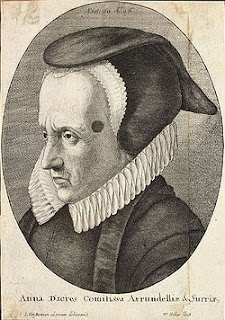 Once I Was a Clever Boy features a fascinating post on Catholic Englishwomen during the Reformation era--tounching on the lives of the noble recusants like Anne Dacre Howard, Countess of Arundell and dwelling on the greatness of St. Margaret Clitherow:

Some of them were aristocrats, such as Madeleine, Lady Dacre, whose religious opinions earned the respect of Queen Elizabeth I, and about whom Alice Hogge has written in God's Secret Agents, Lady Vaux and the other well-born ladies who appear in Fr. John Gerard's Autobiography, and Anne, Countess of Arundel, the wife of St Philip Howard.
As women of birth and rank they were able to exercise their authority in their local communities and in some cases protect their co-religionists.
Rather different was the story of the York housewife St Margaret Clitherow. As a regular visitor to York I have known her story virtually all my life. . . .
Read the rest here.
Posted by Stephanie A. Mann at 2:04 AM