Another Murder in Another Cathedral 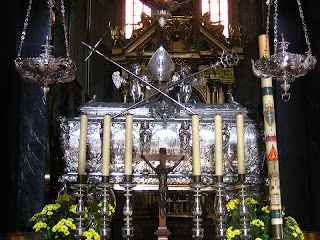 The Catholic Herald recently featured St. Stanislaus, the Patron Saint of Poland, whose feast day is celebrated on April 11. Part of the interest is the parallels between St. Stanislaus and St. Thomas a Becket, since both were assassinated because of conflict with their monarch--but there are variations--

Stanislaus (1030-1079), the patron saint of Poland, was killed by King Bolesław II after using his position as bishop of Kraków to denounce that monarch.
His story has parallels with that of St Thomas Becket, whose murder was authorised by King Henry II almost a century later. Both saints have inspired admiration in some and scepticism in others.
One of Stanislaus’s greatest devotees was John Paul II, who in 1979 devoted his first Apostolic Letter, Rutilans Agmen, to the saint. The letter expressed his wonder that he, a successor of Stanislaus in the see of Kraków, should, “by the inscrutable designs of God”, have been elected Pope in the 900th anniversary year of his predecessor’s martyrdom. In truth, very little is known of Stanislaus. No contemporary biography has survived; and the earliest account of his life was produced by a Dominican monk at the time of Stanislaus’s canonisation, 174 years after his death.
Unlike St. Thomas a Becket, St. Stanislaus was more concerned with the moral behaviour of his monarch, King Boleslaw II, sometimes called Boleslaw the Cruel:
At all events, when Bolesław showed no disposition to repent, Stanislaus excommunicated him. The infuriated monarch made his way to the chapel outside Kraków where the bishop was hiding, and ordered his guards to kill him.
Unlike the knights who murdered Thomas Becket, Bolesław’s henchmen had no stomach for the task. Furious, the king himself entered the church and slew Stanislaus, in some versions as he was celebrating Mass. The body was then hacked to pieces and thrown into a pool, wherein (we are told) it miraculously re-integrated.
Reaction to St. Stanislaus' death led to the king's exile and eventual assassination, but not to the quick canonization St. Thomas a Becket's martyrdom occasioned. However, St. Stanislaus' remains, once reassembled, and his tomb were not destroyed--although the Nazis certainly planned to blow up all of Krakow during World War II.

(Picture credit: Wikipedia, Bogitor)
Posted by Stephanie A. Mann at 2:09 AM