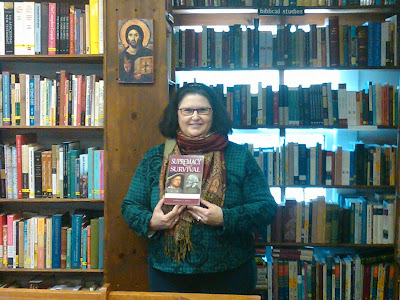 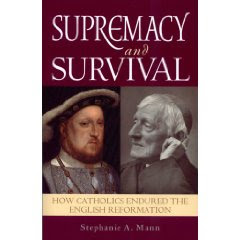 Supremacy and Survival: How Catholics Endured the English Reformation is back in print! The first printing (January 2009) sold out in November 2010; the second printing includes updates in the final chapter on the announcement of the Apostolic Constitution Anglicanorum Coetibus and the beatification of John Henry Newman.

As I've worked on promoting the book since early 2009, it has garnered some nice praise:

(I'm standing in Eighth Day Books holding a copy of my book in the picture above! On the second floor, near the Church history section, but in front of the Biblical studies section--in a great room filled also with books on Philosophy, Theology, and Education!)

"Stephanie Mann has written an instructive popular history of Catholics under Protestant rule in England. . . . If you are a fan of the history of English Catholicism, this is a book to own."
--Rich Leonardi, Son Rise Morning Show Catechist on EWTN and Ten Reasons blogger

"This is, in fact, a highly readable, fast-paced historical overview of the Catholic Church in England from the whole period stretching from the late Middle Ages to the middle of the 20th century. . . ."
--Mike Lord, Proprietor, Southwell Books, Abingdon, Oxfordshire, England

"More than a stimulating history of the Catholic Church in post-reformation England. Mann describes how a modern state imposed its confused, contradictory version of Christianity on an often unwilling and resistant English Catholic people."
--Scott McDermott, author of Charles Carroll, Faithful Revolutionary

"Reading Stephanie Mann's marvelous account of the English Reformation was an exhilarating experience! It was particularly inspiring to learn how the English Catholic laity behaved when the winds of arrogance and anarchy blew violently in England. No one can deny that their example is most fitting for us to recall and to emulate as we, Catholic laity of the 21st Century, try to remain standing in our own 'dictatorship of relativism'."
--Barbara McGuigan, EWTN host of Open Line and The Good Fight

"When it comes to tellings of the English Reformation, a delicate balance of wit and gravity must be observed if any justice is to be done to this dramatic period in Western history. Stephanie Mann has done just that; in Supremacy and Survival, one gets the facts and figures of the English Reformation, while at the same time getting a hearty dose of the irony and sheer tragedy of English religion in the years following the reign of King Henry VIII."
--Matt Swaim, Producer of the Son Rise Morning Show on EWTN, author of The Eucharist and the Rosary and Prayer in the Digital Age

"Narrat[ing] with clarity and insight, Mann draws from a variety of scholarly studies on the Reformation, making the book an excellent introduction to the fall and subsequent rise of the Catholic Church in the British Isles . . . the way in which Mann synthesizes the information into a coherent and flowing analysis gave me a deeper understanding of the sequence and significance of events. . . ."
--Elena Maria Vidal, author of Trianon, Madame Royale, and The Night’s Dark Shade

"Stephanie Mann succeeds in describing the aftermath of the English Reformation in a way which is informative, convincing, and readable. Her account is surprisingly thorough for such a short book, and includes a whole range of political and cultural consequences of the English Catholic Revival--a truly amazing event which continues to this day"
--Father John Vidmar, OP, Associate Professor of History at Providence College, author of English Catholic Historians and the English Reformation, 1585-1954 and The Catholic Church through the Ages

"Heroism, betrayal, murder, conniving – this period of history has it all, and Stephanie Mann tells the gripping story with skill and verve."
--Thomas E. Woods, Jr., Ph.D., New York Times best-selling author of How the Catholic Church Built Civilization

I certainly appreciate each of these formal recommendations--and the comments I've received from other readers of Supremacy and Survival, those who've sent emails after radio interviews, and other comments and suggestions, etc.